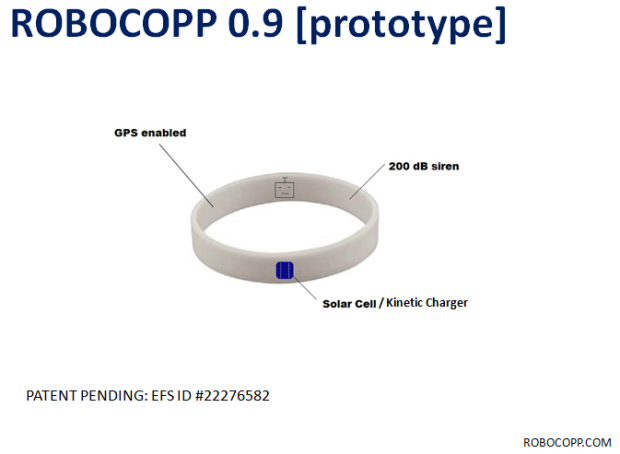 ROBOCOPP is a social start-up that wants to change the world.

Their goal is to eradicate one of the most hideous and unfortunately wide-spread crimes: rape.

It is a lofty goal, but they don’t feel it’s impossible.

More than 250,000 cases of rape or attempted rape were recorded by police annually in 65 countries in 2011 (these are only the recorded cases). Experts suspect the true numbers are exponentially higher.

The humanitarian news organization IRIN claims that an estimated “500,000 rapes are committed annually in South Africa.”

Of all countries in the world, the U.S. has the highest rate of rape at 27 percent preceded by Brazil at 21 percent.

For the first time, the technology is available to eradicate this vicious crime. It is only a matter of putting the pieces together! America is the first country.

ROBOCOPP 0.5 is a simple keychain with emergency LED light and a 120dB siren. It was considered a “safety whistle on steroids” and it sold over 100 units through word-of-mouth marketing only.

Now, plans are underway to build the next version, ROBOCOPP 0.9. It is a more sophisticated and advanced GPS-tracked wearable device and will also have dispatcher support.

ROBOCOPP, billed as “your personal bodyguard,” sends a GPS-tagged distress signal with the press of a button; a ROBOCOPP operator will let police and designated friends and family members know that the user is in trouble; ROBOCOPP operators monitor the user’s location and makes sure immediate help arrives.

To complete the new version, funds are needed to hire more high-calibre engineers to produce the first line of inventory.