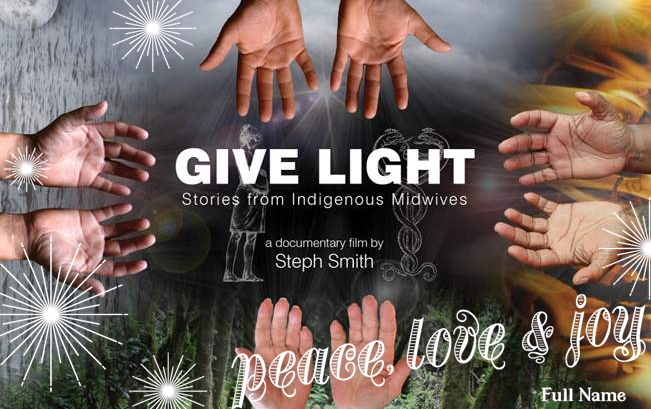 GIVE LIGHT is a feature-length documentary that shares the oral histories of indigenous midwives in the face of a modern medical industry.

In Give Light: Stories from Indigenous Midwives, indigenous midwives discuss a time when birth was a natural event and they assisted women to bring the light of a child into this world.

The documentary film records these unique stories and explores how childbirth has been transformed into a medical event that suppresses women’s greatest potential – creation, to ~ Give Light.

The film reveals the practical use of herbs and the methods of indigenous midwives in communities where birth is still considered a natural process.

The documentary introduces indigenous midwives from the Himbas tribe in Namibia, Africa; the Yawalapitias of Brazil; the Kogis of Colombia; the Andeans of Peru and elsewhere.

Travel to developed countries and the United States is taken to explore what indigenous midwives did before modern medicine denounced them and their practice.

The film showcases how many midwives fear persecution and risk having their practices outlawed; while the medical industry refuses to acknowledge their specific skills and knowledge.

This same industry has taken great measures to prevent women from using their midwifery vocation to generate income – while creating a global cesarean epidemic.

Give Light: Stories from Indigenous Midwives seeks to inspire, entertain, and spark dialogue and action regarding the future of maternity health and the role of midwives in contemporary society.

Through an energetic outreach campaign, this film has the potential to educate women and medical professionals around the world – and in areas where even more restrictive legislation is proposed that would impact midwives’ rights.

This film can help to reignite the debate about the epidemic of cesarean births, as new statistic show that more than a third of the women giving birth in the United States today are having cesarean sections, many unnecessary.