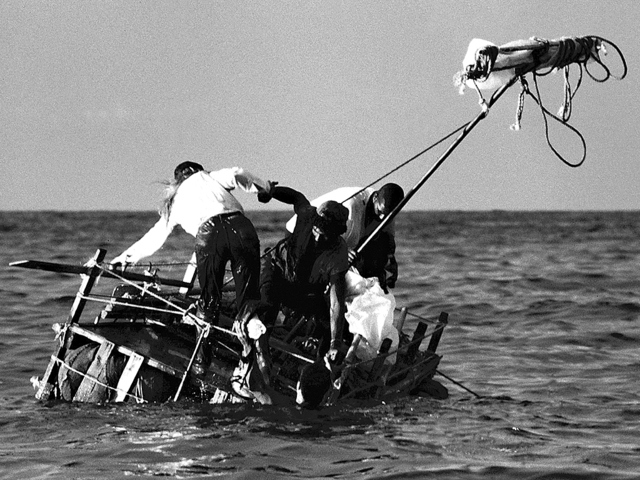 The exhibition “Exodus: Alternate Documents”, is a reflection on the human displacements phenomenon and their impact on the cultural understanding of the concept of nation.

The project takes as a starting point the presentation of first-hand historical material: a collection of 70 photographs taken by Willy Castellanos in Havana during the ‘Exodus of Los Balseros of 1994.

Between August and September of that year, more than 50,000 Cubans embarked towards the United States in precarious rafts built with their own mediums, in what constituted one of the most dramatic episodes of Cuban contemporary history.

“Exodus: Alternate Documents” is a joint effort – on the 20th anniversary of the “Balseros Crisis” – between CCEMiami and Aluna Art Foundation, with the collaboration of The Cuban Museum Miami , The Cuban Heritage Collection (UM), and with the support of institutions like The Cuban Research Institute (Miami International University), El Nuevo Herald Miami and individuals in the City of Miami.

Photographs, interactive installations and screens for videos will comprise this show. A video room will be installed for filming where the testimonies of those interested in participating in the reconstruction of the event from their experiences.

Public convocations will be made through diverse media inviting the residents of Miami to participate. The interviews, lectures, open talks collected and other material collected will serve for the production of a lengthier documentary and will remain treasured in the archives of several universities and institutions in Miami.

Additionally, two installations by invited prestigious Cuban-American artists Coco Fusco and Juan Si González will be presented. The publication of a book on the exhibit is also planned.