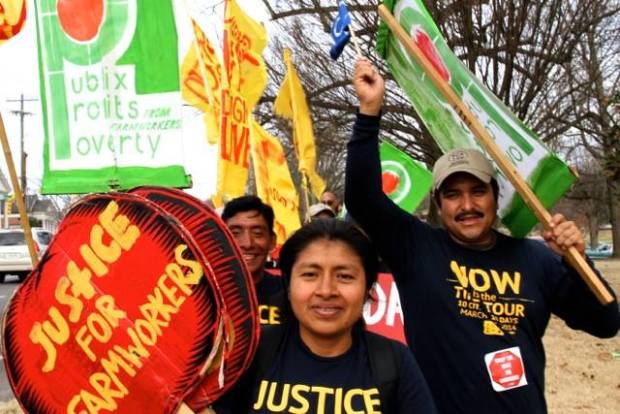 The Student/Farmworker Alliance (SFA) is a national network of students and youth organizing with farmworkers to build a new day of dignity and respect in the nation’s agricultural industry.

Since 2000, SFA has struggled in solidarity, hand in hand, with one of the most successful and creative farmworker justice movements of this generation: the Coalition of Immokalee Workers (CIW).

This September, one of the most important traditions will continue as students and youth from across the country converge in Immokalee, Florida – the birthplace of the dynamic movement – for the annual SFA Encuentro, an in-depth weekend of relationship-building, training, strategizing and reflection.

This year’s Encuentro will lay the groundwork for an intensive year of on-campus organizing to escalate Boot the Braids — a student-driven campaign to bring the national hamburger chain, Wendy’s, into the Fair Food Program.

Funds will go directly to the cost of supporting the students and youth traveling thousands of miles to be part of the Encuentro. All participants are encouraged to fund raise on their own as well, so support is coming from a variety of fundraising efforts.

farm workers, food justice, students
Previous Post All it takes is the right outreach for Latino voter turnout
Next PostVideo: Honduras' ambitious experiment to save a country and its future

All it takes is the right outreach for Latino voter turnout
Comment
Video: Honduras' ambitious experiment to save a country and its future