Latina Lista: News from the Latinx perspective > NewsMundo > Cuba’s version of Craigslist – a first step into the Internet economy?

Cuba’s version of Craigslist – a first step into the Internet economy? 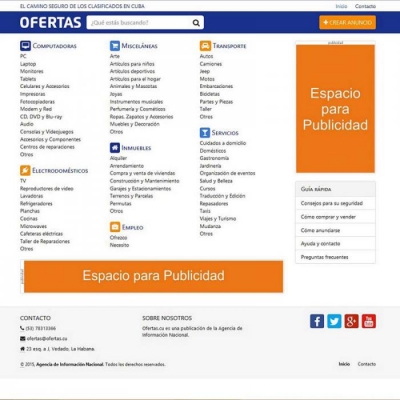 LatinaLista — Some would say Cubans have been preparing to rejoin the world long before the official re-opening of the U.S. Embassy this Friday, when Sec. of State John Kerry is due to raise the stars and stripes for the first time in 55 years.

Ever since December 17, when teams from both countries hashed out the details of the U.S. finally bringing Cuba back into the international fold, the government has been power-walking its way into the 21st Century — Creating public wi-fi spots, accepting U.S.-based yacht charters and cruise expeditions, and even agreeing to a U.S. film crew filming a reality television series — the Discovery Channel’s Cuban Chrome.

However, there’s no clearer sign of Cuba’s about-face in embracing elements of capitalism than the government’s launch of its own classified ads website.

Dubbed “Ofertas” (Offers), and looking a lot like a scaled-down version of Craigslist, Cubans are encouraged to post what they are looking for, want to sell, buy or rent. From selling cars and buying houses to finding jobs and even booking flights “to anywhere in the world,” the site seems to strive to be more than just a 21st Century solution for a population still stuck in the 1950s.

Put under the jurisdiction of the National Information Agency, the site’s press release made it a point to let people know that the web page can be accessed from any place in the world, as well as from Cuba, and can be navigated by institutions from the internet-at-large in such fields as science, education, health and “Computer Youth Clubs.”

It seems the Cuban government can’t wait to join the 21st Century.

Book Review: Negras: Stories of Puerto Rican Slave Women
Comment
Immigration lawyer, tireless fighter for the undocumented, now finds himself at mercy of the court — because he exposed an unlawful truth