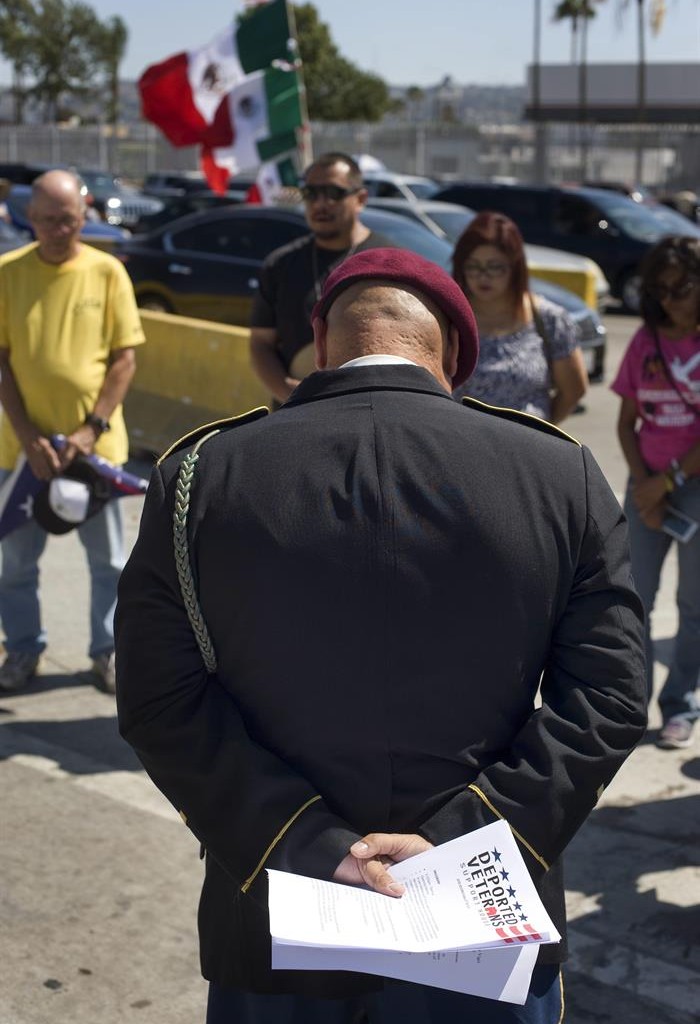 A group of veterans that were deported to Mexico held a vigil on the 4th of July at the border to demand the U.S. government expedite humanitarian visas for those who need to return and receive medical assistance.

During celebrations for the United States Independence Day, veterans placed crosses in memory of those who have lost their lives.

Among those was Jose Solorio, who died in mid-June at a hospital in San Diego after not being treated on time for pulmonary fibrosis. He had been part of the armed forces from which he was discharged with honors. Jose Solorio was deported in 2001, when he was detained during a traffic offense with possession of narcotics.

Solorio arrived in Tijuana where he started to develop the symptoms of pulmonary fibrosis. Since he was a veteran and entitled to receive medical help, he applied for a permit to re-enter the U.S. Finally, in June, thanks to the help of The American Union of Civil Liberties, the United States government gave him the humanitarian permit for 60 days so he could be seen in a hospital in California, even though it was too late.

“If he had received medical treatment, he probably would not had died,” said Anna Castro, ACLU spokesperson in San Diego. Castro deems it necessary to change these policies by the Department of Veterans Affairs.

“The least that the U.S. government owes them is their veterans’ benefits,” Castro said.

Now, ACLU is analyzing the case of 3 veterans that are now in Mexico and who require medical care.

One of them is Armando Cervantes, 60 years old and who requires an emergency knee surgery, otherwise, he could lose his leg to amputation. “The only thing that I ask for is compassion and consideration, don’t leave us behind,” said Cervantes, who was part of the armed forces from 1975 to 1981. “I need immediate surgery because it is getting infected and I don’t want to lose part of my body.”

Hector Barjas, a U.S. veteran who directs a support home for deported vets in Tijuana, Baja California, Mexico, explained that even though he and the other veterans want to return home to their families, at this moment all they want is for the federal government to at least let them have their rightful medical benefits. Barajas indicated that he is aware of at least 7 soldiers who have died in Mexico with illnesses that could have been treated in the United States.

“When we go to ask for a visa, they tell us that the Mexican government offers medical services as well, but the problem is that in some cases the veterans have already had previous surgeries and the Mexican government does not take responsibility for everything. In the U.S.,it is free because it is our right as being veterans from that country.”

Even though there are no official numbers, activists estimate 12,000 veterans have been deported from the United States of America.