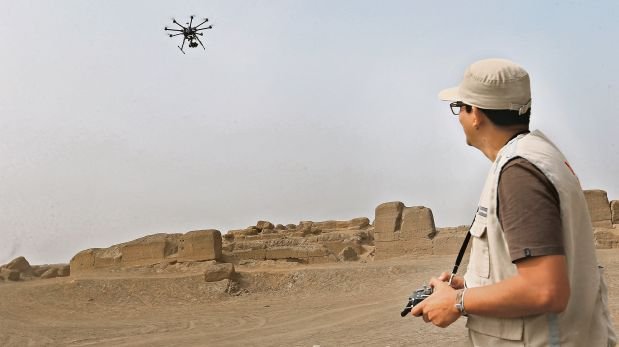 Peru is a country with an abundance of archaeological sites, beautiful and ripe with cultural history. Unfortunately, the resources are lacking to protect all of them from threats such as environmental damage and pollution from trash.

Since last year, the Ministry of Culture has slowly begun introducing drones into their tools to protect sites, many of which have been listed on the country’s Cultural Heritage sites by UNESCO.

El Comercio reports on a current project in Chosica at the archaeological zone of Cajamarquilla, where archaeologist Lorenzo Risco works on preservation and records.

Risco maneuvers a drone 50 meters high in the air overlooking the site, just as he and many other archaeologists have done at 280 of the 360 sites in the Peruvian capital.

According to El Comercio, Cajamarquilla is the largest mud city in the Peruvian central coast, dating back to 600 and 730 AD.

Unfortunately, nearby roads used by minibuses and taxis bring trash, diapers, and leftover foods, among other debris to build up and damage the site. Due to the harm done by this pollution, the Ministry of Culture has placed the site at risk of damage, as well at risk of invasion, reports El Comercio.

Luis Felipe Mejia, director of Archaeological Heritage Property of the Ministry of Culture, first introduced the idea of using drones to protect the sites last year. He said using them allows the Ministry to verify whether or not a site was damaged by invaders or geological causes, according to El Comercio.

Drones are used to keep track of the damage and invasions, in order to better understand these threats and develop prevention plans.