Latina Lista: News from the Latinx perspective > News > Guest Voz: Why are Republicans Scrambling to Suppress the Latino Vote?

Guest Voz: Why are Republicans Scrambling to Suppress the Latino Vote? 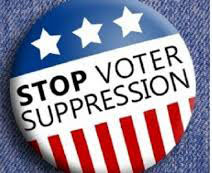 It is indeed puzzling to witness Republicans scrambling to suppress the Latino vote for the November election. Governor Gregg Abbott’s recent order to limit the number of ballot drop-off locations for mail-in ballots to only one location in each Texas county, an action that has initiated lawsuits charging Latino voter suppression from the League of United Latin American Citizens (LULAC), the Texas chapter of the League of Women Voters, and two individuals.

In addition to creating more difficulty for Latino voters, Governor Abbott’s action creates higher barriers for persons with disabilities and those 65 years and older who are concerned for their personal safety and the additional distance that they will need to travel to a single location.

Other recent actions initiated by Republicans to limit voter participation include the numerous false allegations of fraud associated with mail-in ballots, significant reductions in the capabilities of the U.S. Post Office to process mail-in ballots, and not allowing Texas voters to use COVID-19 exposure as a basis for requesting a mail-in ballot.

The irony is not lost here – why are Republicans in such a frenzy to further limit Latino voter participation given their historically low voter turnout rates in past presidential elections?

Rather than encourage Latino voter turnout, however, Republicans like Gov. Abbott are experiencing a re-awakening of their strategy due to several recent trends:

Governor Abbott’s action especially wreaks of hypocrisy. During the last gubernatorial election, the governor’s televised campaign included a Hispanic family member in a pitch to capture the support of Texas Latinos. While the Latino vote may have been candy to Governor Abbott in the past, perhaps the governor’s current sentiments about Latino voters is best captured in B.B. King’s song “The Thrill is Gone.”

With the exception of LULAC, it is particularly troublesome to observe the relative silence among Latino business and civic organizations that have publicly challenged the legality and morality of these Latino voter suppression tactics. Rather than bury one’s head in the sand, these voices need to be loud and constant in the days remaining to the November election.

In my opinion, the available evidence regarding the increasing number of Latino eligible voters, registration rates, and polling results suggests that Latinos are energized to vote in the November election and that Republicans may pay a heavy price for their deliberate tactics to suppress the Latino vote.

(Editor’s Note: This blog post was originally published on The Culture of Research™ blog)

Dr. Edward T. Rincón, Ph.D., is president of Dallas-based Rincón & Associates LLC and is a research psychologist. In his new book, “The Culture of Research, Insights from a 45-year practice in the design and execution of multicultural research,” Rincón identifies methodological problems in high-stakes studies that include multicultural persons and offers practical solutions.