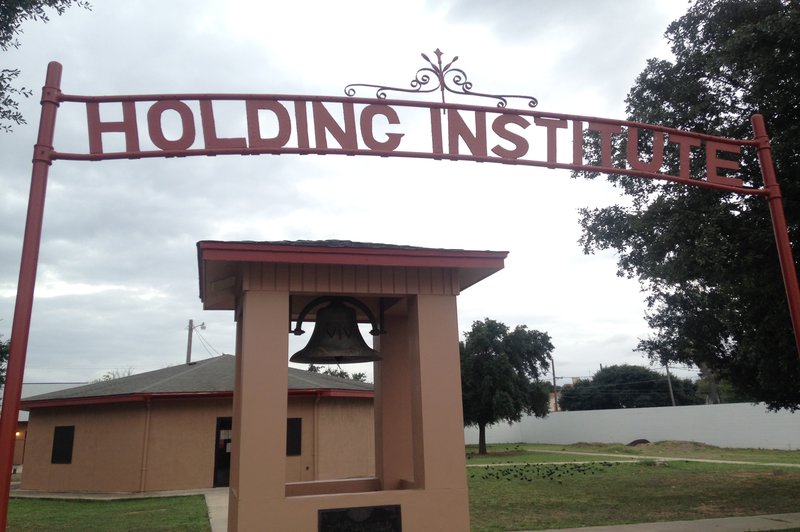 Perhaps since Laredo sits on the southern border, tucked away from major Texas cities, it’s easy for people to be unaware of Laredo’s role with the Central American refugees who escape drug violence and extreme poverty in their home countries.

Smith described Laredo as isolated because of its geography.

Smith said the Holding Institute opened in the 1860s as a school and mission outreach for women and children primarily from Mexico, then it turned into a seminary, and then the property was destroyed in a flood. Afterwards, it moved to north Laredo and was built from scratch as a school in the 50s and 60s, but closed down in the late 80s.

Eventually it turned into a community center and moved to its current location, which was previously a lumberyard.

More than 10,622 unaccompanied children and 16,329 adults with children were apprehended at the U.S.-Mexico border in June alone last summer.

“It happened, and then people think it’s over, like, ‘okay immigration crisis solved, so lets move to the next one,’” said Smith.

Although the numbers of undocumented arrivals have significantly decreased since the summer of 2014, they haven’t stopped coming.

The summer the Holding Institute reopened, a friend of Smith’s passed by the downtown Greyhound station and saw a group of migrants, and asked Smith if the facility could house them since they would be sleeping at the bus station.

Smith, afraid of how the city would respond, declined.

“I said ‘we can’t because we are going to get in big trouble with the city,’ and we had only been open a few months, and he said ‘you have to,’ and I said no again,” said Smith.

Although Smith declined, the opportunity came knocking on his doorstep. Literally.

“The next thing I know, I opened the gate on Santa Maria Street and saw a group of women, and I asked ‘how did you get here?’ and they said the bus station sent them.”

Immediately, Smith got his older son to set up the ancient army cots that were at the facility so the women had a place to sleep. Other local Laredo organizations like the Bethany House and Catholic Social Services soon got involved to provide resources for the migrants.

The Bethany House, a homeless shelter and soup kitchen, was one of the major contributors when the crisis initially occurred. Monica Bautista, Director of Community Relations, and Mary Gaona, Executive Director of the Bethany House, said the non-profits came together with no plan in advance.

“Whenever they [the migrants] came to the bus station, the first stop afterwards was the Bethany House,” said Bautista.

Greyhound contacted the Bethany House to see if they could provide meals for the migrants. Bautista said the migrants would come shower, change, eat, and then go back to the Holding Institute where they were staying.

Bautista said the Bethany House has provided more than 3,000 meals, 600 showers and 600 sets of clothing for the migrants since the crisis unfolded in 2014.

Smith said the community has been very receptive, and the only complaints the facility has received about helping the migrants were from people out of town.

Local organizations and individuals even formed their own coalition to work together specifically to help the migrants, called the Laredo Humanitarian Relief Team. Sister Maria Teresa De Llano of Catholic Social Services was put in charge of the relief team two months after the crisis came to Laredo.

De Llano said the team explained to the migrants where to get off and switch buses when they were going to meet relatives across the country, and they would give them water, juice, snacks, and milk for the babies.

“Most don’t have any money whatsoever,” she said.

Smith said that compared to other border cities, Laredo didn’t provide any support at the municipal level for this crisis.

“Everything that was done here was done through local individuals, local churches, local people, whereas the city of McAllen poured in tons of dollars – the city here didn’t pour in a penny,” he said. “They just stood outside watching.”

Smith thought this would change when the feds came in and also promised assistance, but, again, nothing was done.

“Any agency all along the border would promise FEMA dollars…and nothing,” he said. “Not to this day.”

Despite serving a large population with a tight budget and limited resources, what motivates Smith and other volunteers is the community’s willingness to act.

De Llano said Greyhound has been one of the saving graces throughout this crisis by doing things like pushing benches aside in their station so the migrants have room to sleep, and by calling her as soon as the migrants arrive at the station, even if it usually happens in the middle of the night.

“I have to commend Greyhound who are cooperative and community oriented people,” she said.

De Llano said instead of Immigration and Customs Enforcement dropping the women and children off in the middle of night, with nowhere to sleep, “ICE is very good at dropping off people at the Holding Institute.”

Perhaps the most heartwarming act of kindness, Smith said, came from another underprivileged person doing what he could to help. A homeless Cuban man that Smith frequently sees at the Holding Institute noticed the migrant women at the facility recently and was concerned.

“You have a homeless guy who doesn’t have a job…lives out of his car, he’s barely making it, and yet he was able to give what he had,” he said. “That’s incredible, that’s the secret.”

De Llano has heard some of the stories from the women she’s worked with about why they left their countries. They escape gang, drug and domestic violence.

One migrant explained to De Llano her heart-wrenching position, saying “I would rather my child die in my arms in the desert because of thirst or hunger than them be shot and killed.”

Smith said he too has heard horror stories about the migrants’ home countries and their voyages to the United States. He realizes the emotional impact the Holding Institute has on the migrants.

“I can tell you this… you see people walking in here, trudging and with just physical and emotional baggage…we walk them to showers, and when they walk out they are totally changed,” he said.

It doesn’t take much, Smith said.

But more than a five-minute how shower and a 25-cent bowl of Ramen soup is being offered at the Holding Institute. After hearing some migrants say they were disillusioned in achieving the American dream, Smith decided to offer more.

“We are now offering—for someone here legally or illegally—if they’ve never finished elementary or middle school, they can finish it here for free, and we have full authorization from the Mexican government to issue elementary and middle school certificates of completion,” said Smith.

Smith said this will help the undocumented with no papers or GED to be able to get a job, and receive a Mexican diploma. After a group of students graduated the middle school program and asked about high school, Smith started talking to the Mexican Consulate about a high school diploma program.

Now, this will be starting at the Holding Institute in January 2016.

“If we get a group that finishes prepa [high school], then I have a year and a half or two years to work on an agreement with a Mexican university here,” he said.

The education program is through the Mexican department of education, called INEA, and it’s online and self-paced. Smith said he hopes to get volunteer instructors to work with the students for all subjects.

“As far as the high school, what we are doing here, no one is doing that,” he said.

Smith said it is everyone’s duty to serve and love his or her neighbors.

Smith said one of the most important things the Laredo Humanitarian Relief Team is responsible for is reuniting migrants with loved ones across the country.

“One of our saving graces is actually Facebook, believe it or not,” he said.

“What we are terribly lacking in, and the Methodist Church has tried to address this, is that there’s no network,” said Smith. “My dream is to have a 311 national system.”

Without a centralized system, Smith said, they have to piecemeal the relatives and contacts together, and when they send the migrants off they pray that someone exists and speaks Spanish to help them.

Aside from all of the roadblocks the Holding Institute has faced, Smith is motivated to do all he can to better the lives of the migrants.

“We [the Holding Institute] had nothing to do with immigration, at all, but it was brought to my attention that these Central Americans are women and children and underserved, so it met our mission,” he said.

Even if the city and the feds have neglected this crisis, the mission hasn’t been forgotten.

Sophia Campos is a 21-year-old student at Texas State University who enjoys meeting new people and traveling to new places.