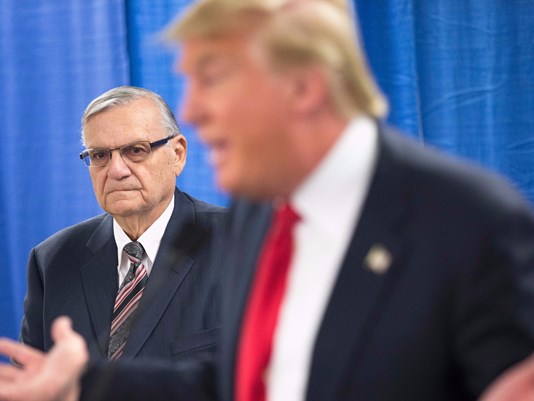 LatinaLista — After a nationwide, bipartisan consensus that last week was not President Donald J. Trump’s finest moments as Commander-in-Chief, Trump is on his way to Arizona today to asauge his bruised ego with a rally of his most die-hard supporters touting the one issue that still accelerates his base into a frenzy — immigration.

Even though Greg Stanton, the mayor of Phoenix asked the President not to come, the White House turned a deaf ear to the mayor’s request.

Trump’s arrival in the state has many across the nation fearing an ulterior motive.

Trump’s agenda for the trip, in addition to the rally in Phoenix, is a visit to a Marine Corps. base in Yuma Arizona, along the Arizona and Mexico border.

A combination of new tech tools, “boots on the ground” and border fencing have elevated Yuma into a success story for Trump’s war on illegal immigration that will most probably be the centerpiece of Trump’s speech to his fans.

However, what really worries state officials, along with, immigrant advocate groups, Latino activist organizations and others is what the White House is not confirming Trump may do in Phoenix — pardon Sheriff Joe Arpaio.

The 85-year-old was voted out of the Maricopa County office in November and last month was found guilty of criminal contempt by a federal judge in Arizona over his refusal to stop targeting Latinos for more than a year after a court order barred his deputies from detaining immigrants.

Rumors are running rampant that Trump’s true intention is to pardon Arpaio, who himself was an early Trump supporter. Though Arpaio tells the media that he has not been invited to the Phoenix rally, he has made no secret that he welcomes a presidential pardon.

Latino organizations that spent years battling Arpaio’s racial profiling and Tent City incarceration tactics are banding together creating a petition preemptively discouraging Trump if he has any intention of pardoning Arpaio.

Over 70 organizations joined together to send Trump a letter, that reads in part:

…During his 24 year tenure as a sheriff in Arizona, Joe Arpaio used his position of authority to drive a personal agenda of hate and racism through a brutal assault on Maricopa County’s Latino population. In the name of cracking down on undocumented immigrants, Arpaio brutalized and terrorized thousands of Latinos. His tactics included racial profiling of children, tourists, legal residents, and U.S. citizens – often detaining them for hours at a time without a criminal charge or warrant. He inflicted inhumane punishments that involved torture, humiliation, and degradation of Latino inmates.

As your first presidential pardon, absolving Arpaio of his crimes would send a clear message that the administration will not fight for the rights of our community. We ask that you not interfere with Arpaio’s July 31st criminal-contempt conviction for knowingly violating a federal judge’s order, actions which led to more constitutional abuses from illegal detentions and racial profiling of Latinos.

No amount of time will erase the hateful crimes that Arpaio committed against our community. He is not above the law and should not be granted a pardon given his disregard for basic civil and human rights. …

Condemnation for the possibility of a presidential pardon is coming from all sides and has spawned a #NoJoePardon on Twitter.