Latina Lista: News from the Latinx perspective > NewsMundo > Legislative proposal to benefit hundreds of thousands of Mexican families living in the U.S.

Legislative proposal to benefit hundreds of thousands of Mexican families living in the U.S. 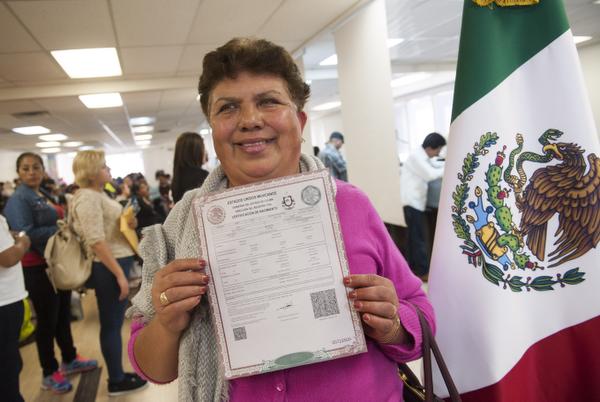 Mexico City – Legislators and experts detailed the urgency of approving a reform to the Mexican Foreign Service law that enables the Mexican Consulate offices in the United States to register Mexican children and adults who emigrated without a birth certificate, thus becoming vulnerable to deportations because of lack of documentation to prove their identity.

At the forum “Mechanisms to Guarantee the Right to Identity for Mexicans Abroad”, Senator Arturo Zamora explained that the current reform proposal would have a positive effect on the hundreds of thousands of Mexicans and their families who live in the United States and who currently lack such type of documentation.

“It is necessary to provide the right to a trans-border identity to those thousands of Mexicans who live in the United States and lack a birth certificate which forces them to return to México to process such documents because they currently lack them. And it is obvious that they do not have a passport, a visa and they have to risk crossing the border in an undocumented manner with all the dangers that it carries.

“They are Mexicans who are practically invisible to the United States government and without a legal identity in Mexico they are doubly invisible with the risk, in the case of children and youth, of being deported and of being trafficked by networks of organized crime.”

The vice president of the Senate Executive Board indicated that the right to an identity of any person should not be conditional to nationality, ethnic origin, social or economic status, nor immigration status or the crossing of borders between countries.

Meanwhile, the president of Be Foundation, Karen Mercado said that due to the double invisibility that hundreds of thousands of Mexicans in the United States live in, they experience the tragedy of not belonging to any country as a result of lacking birth registration.

Mercado said that the Wilson Center Mexican Institute and Be Foundation estimate that thousands of children and young undocumented immigrants in the United States are eligible for Deferred Action but are not able to begin the application process because they were not registered at birth.

“Thousands of young Mexicans are trapped in legal limbo and they remain in a situation of statelessness, this is why it is urgent to approve this reform presented in February 2015 by various senators including Gabriela Cuevas, Benjamín Robles Montoya and Arturo Zamora.”

Crowdfunder: Bringing early childhood education to the urban slums of Colombia
Comment
National campaign strives to get Latinos to know their cholesterol count