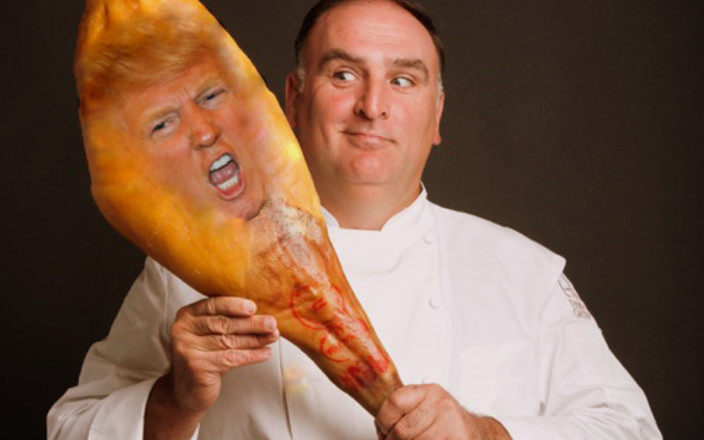 LatinaLista — Back in July when Donald Trump first threw his hat (and foot) into the ring for the GOP presidential nomination, he made his first public insult of Latino immigrants. His now infamous quote reads:

“When Mexico sends its people, they’re not sending their best,” he said. “They’re sending people that have lots of problems…they’re bringing drugs, they’re bringing crime. They’re rapists. And some, I assume, are good people.”

Never an apologist, Trump only doubled-down on his mischaracterization of Mexican immigrants. His opinions caused a B to B backlash, with Univision pulling out from airing Trump’s Miss Universe pageant, the Latino hosts for the pageant, also pulling out, numerous business severing their ties with him and the famed Spanish chef Jose Andres, a recent U.S. citizen himself, canceling his plans to open a Spanish restaurant in the Trump International Hotel in Washington.

Univision, the corporate giant that it is, can afford to fight the lawsuit and pay if they lose but Chef Andres cannot. As of now, the foundation Andres created called ThinkFoodGroup, will bear the brunt of the lawsuit — taking money away from the initiatives to feed the hungry or conduct international educational food programs.

One person didn’t like to see Chef Andres being bullied by the billionaire for defending immigrants, especially Mexican immigrants. So, the former Mexican ambassador to China, Jorge Guajardo, decided to do something. He didn’t have the money either but he knew there was one way Chef Andres might be able to get it — through crowdfunding.

On August 5, Ambassador Guajardo set up the Support Chef Jose Andres Against Trump Lawsuit indiegogo crowdfunding campaign. With a goal of $100,000, the campaign has already garnered over (as of this writing) $7,000.

“More than half of my team is Hispanic, as well as many of our clients,” the chef previously told Spanish newspaper El País. “And as a proud Spanish immigrant, who recently obtained citizenship, I firmly believe that every human being deserves respect, regardless of immigration status,” he added.

According to the crowdfunding site, all the money raised will go directly to the ThinkFoodGroup to cover the expenses of absorbing Trump’s lawsuit.

crowdfunding campaign, featured, lawsuit, Mexico
Previous Post This undocumented immigrant works in a Trump hotel. Here's what he had to say.
Next PostCrowdfunder: Telling the story of minority winemakers in Oregon

This undocumented immigrant works in a Trump hotel. Here's what he had to say.
Comment
Crowdfunder: Telling the story of minority winemakers in Oregon