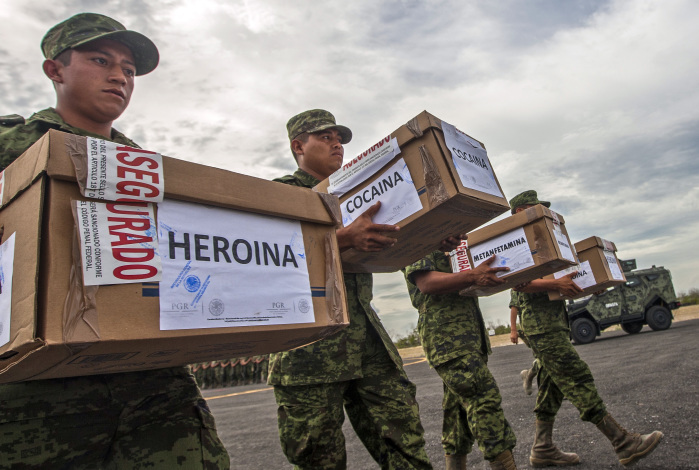 In its 2015 annual drug assessment, the DEA emphasizes Mexico cartel dominance of the US drug market, highlighting the growing strength of the Jalisco Cartel.

Chuck Rosenberg, the Acting Administrator of the Drug Enforcement Administration (DEA), asserts in the agency's 2015 National Drug Threat Assessment (pdf) that the most significant criminal threat to the United States are "the dangerous and highly sophisticated Mexican transnational criminal organizations (TCOs)," which are "the principal suppliers of cocaine, heroin, methamphetamine, and marijuana."

Released on November 4, the report states Mexican groups have no competitors in controlling the US drug market, with the following major Mexican TCOs operating in the United States:

Of these, the Sinaloa Cartel "appears to be the most active supplier" of wholesale quantities of illicit drugs. The criminal group is able to leverage "its expansive resources and dominance in Mexico" to facilitate drug smuggling into and throughout the United States, the report states.

Nonetheless, the report notes that the CJNG "is quickly becoming one of the most powerful TCOs in Mexico and in some cases rivals Sinaloa Cartel trafficking operations in Asia, Europe, and Oceania." The group is also, "by virtue of its growing power," expanding its operations in the United States.

In cities such as Boston, Chicago, Los Angeles, and Philadelphia, Mexican TCOs either dominate or are seeking to establish drug distribution hubs. When it comes to distributing drugs, the DEA report describes the Mexican cartels' modus operandi as "a supply chain system that functions on an as-needed basis," with networks based around family ties and friendships.

Mexican drug organizations are also expanding their presence into heroin markets and regions formerly controlled by Colombian TCOs. Notably, the DEA report indicates that Mexican groups may have adopted South American methods for producing the more refined white heroin customarily processed in Colombia. (Mexico has traditionally processed black tar or brown powder heroin, which is inferior in quality to white powder heroin). This could mean Mexican groups will come to rely less on South American heroin supplies, positioning them to take greater control of the US heroin market, the report states.

Yet the report also asserts that Colombian TCOs continue to play an important role in supplying wholesale quantities of cocaine and heroin, primarily in Northeastern drug markets like Boston and New York City. Nonetheless, in the Midwest and on the East Coast, Mexican TCOs are increasingly serving as sources of supply for Colombian dealers.

Nevertheless, the report also notes that in recent years, Colombian TCOs have increased drug trafficking through the Caribbean, attempting to avoid cartel violence in Mexico and increased law enforcement along the US/Mexico border. According to the DEA report, Miami is the main US point of entry for South American drug shipments smuggled through the Caribbean.

The fact that the DEA contends the Jalisco Cartel is now able to rival the Sinaloa Cartel's operations… should be a major concern for Mexico.

Dominating Colombia's cocaine and heroin trade are the country's BACRIM (from the Spanish acronym for "criminal bands"), such as the Urabeños, as well as guerrilla group the Revolutionary Armed Forces of Colombia (FARC). However, these groups primarily rely on Mexican TCOs for distributing drugs in the United States.

For instance, the DEA reports cites investigative reports that indicate a working relationship "between multiple FARC fronts and Mexican TCOs" to transport cocaine into the United States. This includes the Zetas, the Beltran Leyva Organization, Jalisco Cartel, and Sinaloa Cartel. The Urabeños and FARC also allegedly have a business relationship to distribute cocaine into the United States through Mexican TCOs.

The fact that the DEA contends the Jalisco Cartel is now able to rival the Sinaloa Cartel's operations in overseas markets, and is expanding its presence in the United States, should be a major concern for Mexico. The Jalisco Cartel was one of various upstart criminal groups to emerge after the fragmentation of Mexico's larger cartels. Breaking onto the scene earlier this year, the Jalisco Cartel engaged in a series of violent actions that demonstrated its strength and increased its criminal profile.

The wider implication of the DEA report is that, at least in the Jalisco Cartel's case, Mexican authorities have not done enough to stop this "new generation" drug trafficking group from rapidly expanding its strength and influence. In a worst case scenario, other criminal groups could soon follow.

The report also makes clear that the Mexico cartels remain the dominant force when it comes to drug trafficking and distribution in the US. In particular, Mexico could be poised to further displace Colombian traffickers when it comes to the heroin market. As InSight Crime has previously noted, there have been multiple reports of Mexican TCOs increasing poppy cultivation and refining heroin production to better compete with Colombia's superior product. Given current drug consumption trends in the US and the competition that Mexican traffickers may face from legally produced US marijuana, it is unlikely that the Mexican TCOs will back away from heroin anytime soon.

Despite the marginalization of Colombian TCOs in the United States, Colombian groups such as the Urabeños and FARC will continue to play an important — if less-visible — role in supplying the US drug market. As the DEA report notes, Colombia continues to serve as the primary source of US-bound cocaine, with 90 percent of cocaine samples tested in 2014 of Colombian origin.

drug cartels, drug market, featured, Mexico, United States
Previous Post How the science of human behavior is beginning to reshape the US government
Next Post5 Easy Tips For Your Dreamiest Winter Look Ever