Latina Lista: News from the Latinx perspective > NewsMundo > Why Mexico City officials are being ridiculed for their latest effort to combat gender violence 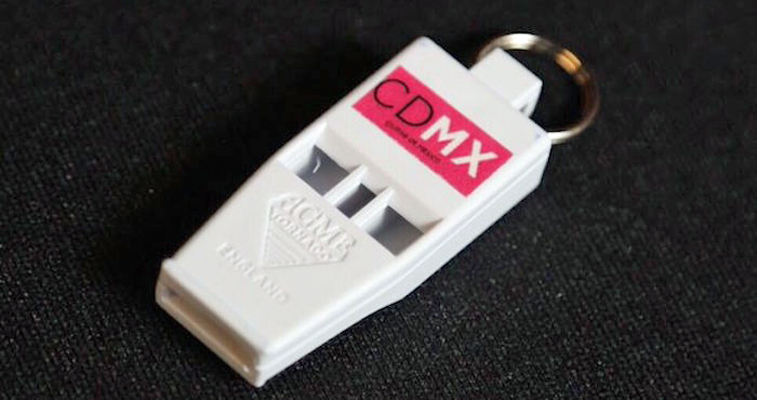 Migue Ángel Mancera, the head of Mexico’s City government, announced that the city is giving away whistles as part of its strategy to eliminate sexual harassment on public transport. He also explained that this whistle will aid women in alerting others when they feel threatened in public spaces.

Through his Twitter account, Mancera said his administration is concerned about the harassment faced by women and clarified that the distribution of whistles is part of the first phase of the strategy to be implemented in Mexico City to eradicate gender violence.

This strategy was launched after one of the first national mass mobilization #VivasNosQueremos against sexism and gender violence. This past April, protestors took to the streets in Mexico to demand their right to live free from harassment and assaults, and to put an end to femicides.

However, the “sexual harassment whistle” has been received with a strong criticism, going viral on Twitter and making the hashtag #ElPitoDeMancera a trending topic. 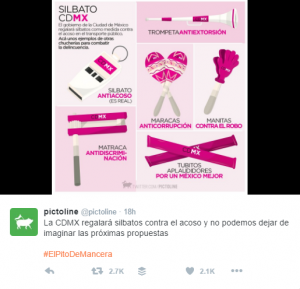 Translation: “Mexico gives away whistles against harassment and we can only imagine what the next proposals will be”: (from left to right): Anti-extortion Horn; Anti-corruption Maracas; “Little hands” theft protection; Anti-discrimination rattle; Blowers for a Better Mexico.

However, rather than being an innovative solution, the whistle is alerting Mexicans of a government with a shortsighted vision and incompetence in addressing a serious issue, resulting in policies that place the burden on victims to prevent harassment and initiatives that are likely to fail in reducing gender violence.

Among other efforts as part of the strategy to reduce sexual harassment include the use of a mobile application called “Vive Segura” (Live Safely) for reporting harassment in minibuses and taxis, which so far has not been made operational. Additionally, it was announced that the Special Prosecutor’s Office for Sex Crimes Unit would be strengthened and that complaints processed by that office would be streamlined.