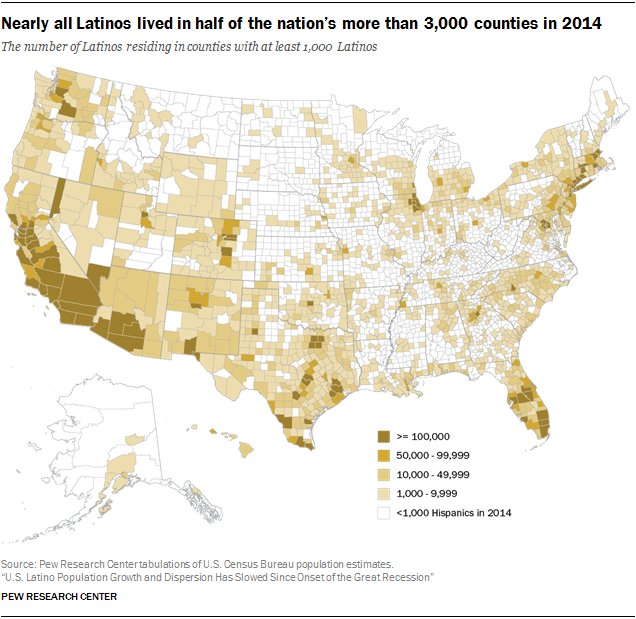 LatinaLista — One of the rallying cries to stir up anti-immigrant sentiment over the years has been to use the phrase “the browning of America.” Equating immigration with brown-skinned people, a.k.a. Latinos, has been the hallmark of the Trump campaign, along with other disingenuous associations.

But a new analysis from Pew Research shows that Latinos aren’t going to be the perpetual political punching bag much longer.

Contrary to popular misperception, Latinos no longer hold the distinction of the fastest growing population in the United States. Since the Great Recession of 2007, Latinos now find ourselves behind the Asian populace in growth rates.

While it’s true that Latinos still account for “more than half (54%) of total U.S. population growth from 2000 to 2014,” it’s no longer true, if ever it was, to say that the Latino population is growing in every county in the nation.

In fact, Latinas are having fewer babies and in those towns that did see a sizable increase in Latinos, it’s due to the small number of Latinos who were there in the first place.

But we are a younger population and do continue to have children, which actually does contribute to our ongoing growth rates.

In other words, the nation’s Latino community, which at one time was dependent on immigration for its growth, is now growing due to more native births.

Native-born Latinos will have no fear of their citizenship being challenged and movement into more areas of the country will be done with ease, even if not always welcomed. What this means is that where Latinos settle will rise a new economic and political influence.

The day may be arriving sooner than some think, and in some places, it already exists.