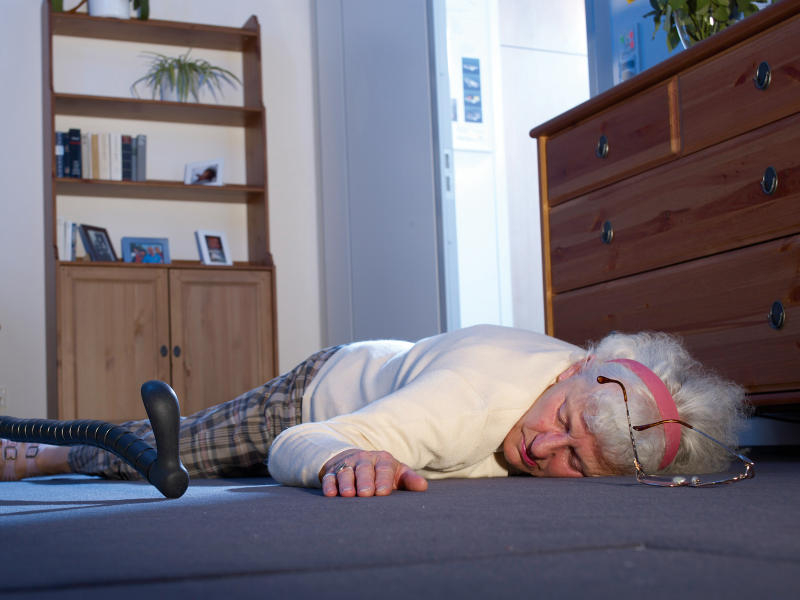 When an elderly parent goes to live with you there are several safety concerns to think about. Some of the more common concerns are about bathroom and kitchen safety. Many adult children add hand rails to their bathrooms. Others add safety locks to some of the kitchen cabinets and remove any cleaning liquids from easy reach.

When your dad is semi-independent, like mine, there are other concerns too, like crime safety and food concerns.

Another common problem that affects senior safety is forgetfulness.

When my dad gets home he leaves his key on the outside of the house. There have been several times when my son comes home from school and he finds the key on the door. Someone with evil intentions could easily break into the house and could not only rob the house but also harm him.

The other crime safety issue is that he has forgotten to lock the door when he goes out. One day he came home and found the door unlocked and he told me about it. I told him that nobody had come home in between the time he left and when he came home. The only explanation was that he had gone out and didn’t lock the door. The house had been sitting with the door unlocked for a few hours easily accessible to any thief.

The food safety issue is one that I never even thought about because my father seems reasonable in so many other ways. However you should never assume anything.

As my father has gotten older he is making more poor food decisions and he’s losing his sense of taste. I realized early on that I couldn’t leave any old food in the refrigerator because he would eat things without smelling them or really looking at them first.

But the worse one of all was one day when I was making meatloaf and I had to leave to take the kids to school. I left a bowl of raw hamburger meat with about half of the meat loaf ingredients, including raw eggs, in the refrigerator because I planned to come back after I had dropped my daughter at the bus stop and my son at school.

When I got back home I found my father eating a serving of raw meat. Never would I have imagined that he would do such a thing or that leaving raw meat in the refrigerator would be dangerous. He said he didn’t even notice it was raw and only thought it tasted weird.

Another day I got home to make dinner and I noticed that the bag of stovetop potatoes was opened. I was worried that it had come from the store like that so I asked the kids if they had opened it. They hadn’t. Then I asked my dad. He said he had opened it and he had eaten some of the raw uncooked potatoes. I asked him why and he said he was just curious and wondered what they were.

In that moment it reminded me of when children open poisonous cleaning materials from the pantry just out of curiosity.

I tried to reason with him and pointed out all the things that he can eat in the house that he obviously knows he can eat. I asked him why would he go and eat something if he had no idea what it was. He couldn’t answer the question and just told me he was curious.

Caring for a parent becomes such a role reversal, and when you’ve been a parent to young children yourself you realize it even more. I now have to care for my father in the same way that I had to care for the children when they were little.

I can’t leave anything outdated in the refrigerator. I have to keep vigilant of expiration dates. I make sure that cleaning products are kept far away from other things he uses. I put notes on food that I leave him so that he knows what is for him. If I don’t want for him to eat something I will put a note on it that says, “Do Not Eat.”

I periodically remind him that he can’t put aluminum foil in the microwave. In fact, most of the time I don’t use aluminum foil on food that I leave him during the day and opt for cling wrap instead. Just in case he suddenly forgets something he’s known all along.

Another concern is that I have a gas stove.

I’ve warned my son that if he ever comes home from school and he smells gas at the door not to go in. He keeps an eye on my father when he’s here and has called me when he thinks my dad is doing something dangerous with the gas stove or heater.

There are several things that you should be aware of if you have an elderly parent living with you and it would be a good idea to create a check list.

Think of the habits you know your parent may have but add as many things as you don’t expect from him or her.

If I could go back to the day of the raw meat incident I would have covered the meat better and I would have placed a big note on it that said “Do Not Eat! Be right back.” Now I know.

The website aPlaceforMom.com has an article with a great check list, “Elderly Home Safety Checklist.” It covers a check list for the home interior, safe storage of chemicals, the exterior of the house, and specifics for every room of the house. It even covers communication.

My dad has a cell phone but I have been thinking that I should get some other type of emergency calling device because he’s alone most of the day and he goes out and walks and takes the bus or train. Communication is definitely an area I need to think about more.

Whether your elderly parent lives alone or with you, the safety check list is important. Thinking ahead of what might happen is something I need to work on more. Reviewing the check list I referenced was a great reminder of many things I hadn’t even thought about.

We are the responsible adults now and we need to care for our parents the way that they cared for us and kept us safe when we were young.

featured, forgetfulness, safety, seniors
Previous Post Crowdfunder: An emergency crowdfunder for the Indigenous Summit of the Americas in Panama
Next PostAfter slew of tech victories, Mexico-based start-up turns its attention to American markets

Crowdfunder: An emergency crowdfunder for the Indigenous Summit of the Americas in Panama
Comment
After slew of tech victories, Mexico-based start-up turns its attention to American markets