Latina Lista: News from the Latinx perspective > NewsMundo > Peruvian 10-year-old gathering accolades from the United Nations to the Queen of England 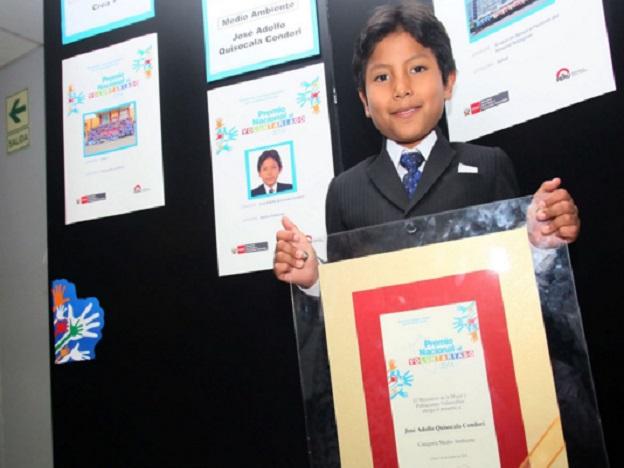 LatinaLista — José Quizocala is only 10 years old and already this young Peruvian has accomplished more than most adults — and it only began three years ago.

José first attracted attention at the age of 7 for his novel idea of helping low-income children buy school supplies or food. José created a special children's bank where children brought in recyclable items and exchanged them for micro-credits. Once the items were sold to recycyling plants, the money would be put in the children's savings accounts which they could then withdraw to buy educational materials, basic foods and even small electrical appliances.

The idea has steadily attracted attention.

In 2013, he won second place in the global competition of Child and Youth Finance International held in Istanbul, Turkey. Last year, via UNICEF, José won First Place in the Youth Finance competition and was invited to join the United Nations Youth Volunteers Program as the sole Peruvian representative. And in a few days, José will be jetting off to London, England to meet the Queen.

On December 10, Queen Elizabeth will be awarding José the Youth Financial Inclusion Innovation Award, an award of the Child & Youth Finance International organization.

In an interview with Diario Correo, when asked what he would say to government officials, he replied, "Believe in children and don't discriminate against us. We can do many things. There is nothing impossible that we can't do because we believe and imagine."

José's latest project is helping low-income youth get scholarships. Believing wholeheartedly in the power of children, José is determined to show people that size does not matter when it comes to solving issues.

"I believe size doesn't matter when it comes to helping bring about change," José said. "We all have the ability to improve the situation of the world, even the children who work in the streets who have to leave their studies. We all can do something."

José dreams of two possible careers for him in the future, either being an economist or work with the environment.

Asked by a reporter if he had ever dreamed he would be where he is today, José simply said," I didn't dream it, I planned it and I did it because I wanted to improve the economic, social and environmental situation encountered by many of my classmates."