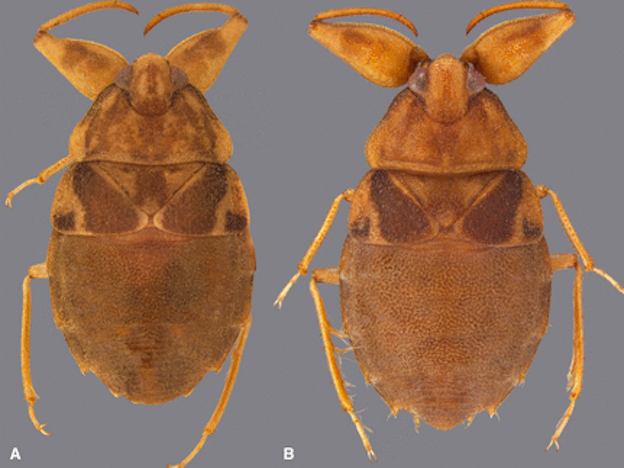 By Corey Watts
Peru This Week

Bugs, beetles, and other invertebrates may be small or even pesky, but without them the web of life would unravel.

The American biologist E. O. Wilson famously described insects and other invertebrates as “the little things that run the world”—referring to both their ecological importance and the fact that there are just so many of them.

Now, a new species has been discovered in the streams of southeastern Peru, near Cusco, and added to the 900,000-plus previously known to science.

Procryphocricos pilcopata was discovered by entomologist Dr Cheryl Barr and Caroline Chaboo from the University of Kansas in 2012.

P. pilcopata is a “true bug” of the order Heteroptera. (Beetles, by contrast, belong to the order Coleoptera.) Also called a “saucer bug” (because of its shape) or “creeping water bug”, the animal is less than 6 millimetres in length.

According to Dr Shepard, “It’s small, flat, dark-brown, nondescript, and might easily be overlooked.”

Braving Dengue fever and parasites, armed with extraordinary patience, years of experience, and a net, the scientists found the tiny aquatic creature living under rocks and leaves in the water.

Another bug, Ambrysus cayo, was also discovered by the scientists in western Belize last year.

The bugs have powerful claws that enable them to cling to debris on the stream bed. They are thought to prey on other insects and even small fish.

Bugs and beetles play an crucial role in the food chain and web of life of streams, forests, and, ultimately, the whole planet.

The scientists have expressed concern that myriad creatures, and what they have to teach us, might be lost as forests are cleared for mining and timber.