Latina Lista: News from the Latinx perspective > NewsMundo > The beatification of El Salvador’s Monseñor Romero briefly unites a country still at war with itself 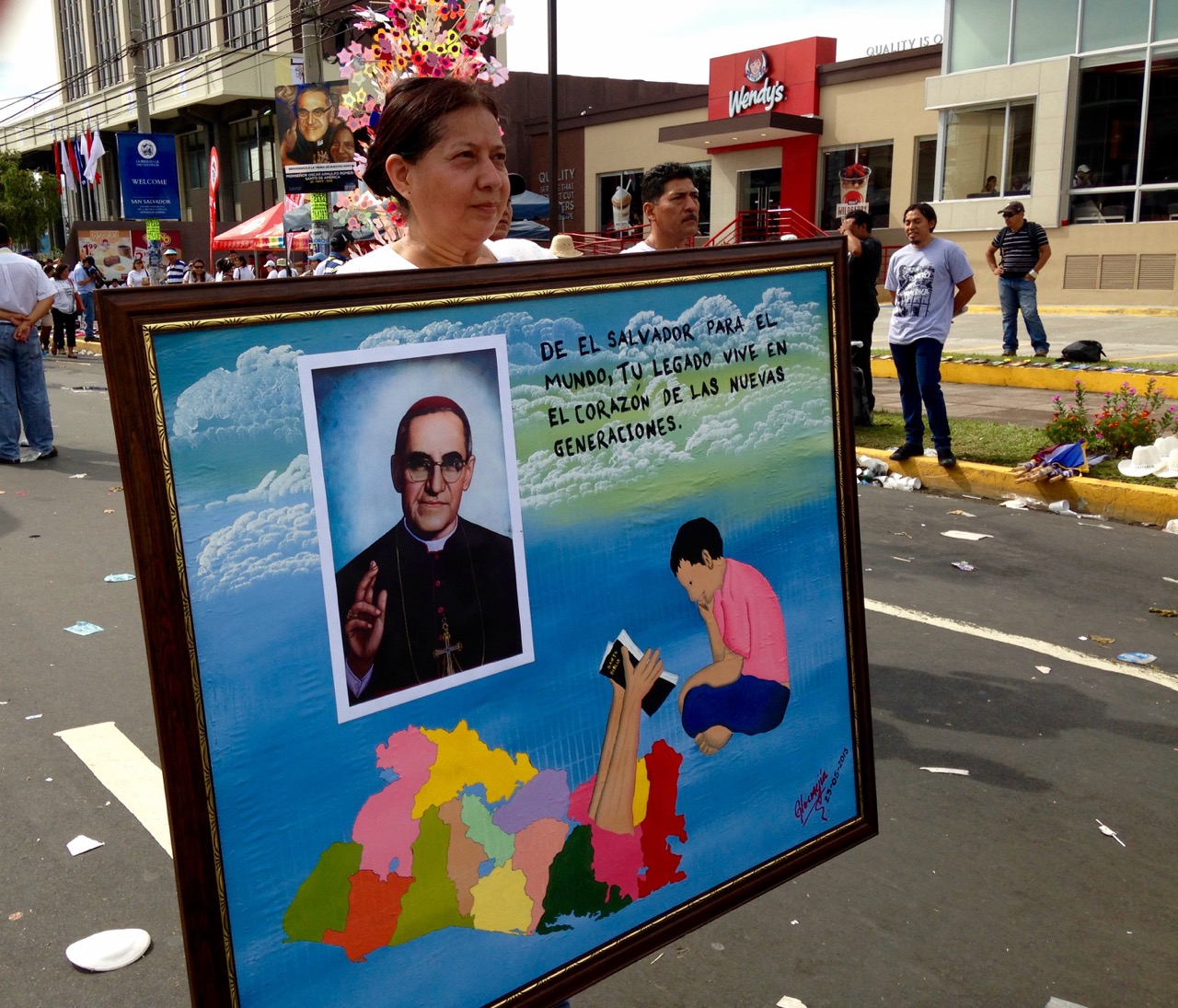 She stands in the middle of the wide city street surrounded by the milling crowd gathered for the beatification ceremony carrying a large canvas in a wooden frame. A portrait of Archbishop Oscar Romero floats in a heaven of fluffy clouds over a coloring-book map of the departments (states) of El Salvador.

Arms sprout from the map holding up an open Bible to a child. Block letters in the clouds spell it out: “FROM EL SALVADOR TO THE WORLD, YOUR LEGACY LIVES IN THE HEART OF THE NEW GENERATIONS.”

Gloria Estupinian, 52, works in a government office and is just learning to paint. The canvas looks heavy and the morning is hot and getting hotter. It can’t be easy to carry the painting through the crowd. “Oh, it’s not a problem. The Mass will be over by midday. I want my painting to be blessed.”

In March 1980, Gloria listened to Romero’s radio broadcasts. Her aunts attended the wake for Monseñor Romero and witnessed the bombs thrown into the crowd, people shot, thousands of shoes left strewn in the streets surrounding the cathedral. She recalls that when Romero was a priest in the department of San Miguel early in his career, he was distant, proud and even hard on his parishioners. But that was before he began to work in poor communities.

Then, she says, “what the people told him got deep into his heart and he began to speak without fear even though the government was against him. He would go to their homes in the poorest barrios, bring rice, beans, sugar and other necessities. He walked in the mud and dust of the streets with the people. It was the people who changed him.”

At least 300,000 were in attendance the morning of May 23, 2015 to witness the Beatification of Monseñor Romero, though most Salvadorans already consider him a Saint. Helicopters and a tiny drone fly low over the crowds filling the streets surrounding the Plaza Salvador del Mundo. A TV cameraman hangs out of the helicopter door.

For those familiar with footage of El Salvador’s civil war, 1980-1992, it is strange to see crowds cheering and waving at the hovering aircraft—in those lethal years (at least 75,000 deaths) a helicopter likely brought terror from the U.S.-supported National Guard and armed forces.

It’s a commercial district in a middle-class area of the city lined with franchises like Wendy’s, KFC and Mister Donut, far from the gritty center of town and the Metropolitan Cathedral surrounded by narrow trash-strewn streets and open-air markets.

One observer said this spot was chosen as a mid-point between the poor and dangerous urban neighborhoods controlled by gangs and the green hills above the city where the rich live in luxurious gated communities.

El Salvador has one of the highest murder rates in the world. Marginalized young people have little hope of jobs that pay a living wage and many are drawn into the criminal economy. The minimum monthly salary is $230 and any place in the country where you can live on that will be a place controlled by violent gangs. 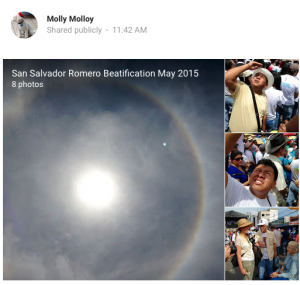 A priest who works with kids most vulnerable to gang recruitment estimates that there are 70,000 full-fledged gang members and possibly 700,000 young people who associate part-time with the gangs. This, in a country smaller in land area than the state of Massachusetts with only 6.4 million people.

As the Vatican representative reads the letter from Pope Francis declaring Romero’s Beatification, a gilded reliquary holding the blood-stained shirt worn at the moment of his assassination is carried through the crowd — and a halo encircles the sun.

The unity on display Saturday morning is framed by structural divisions in the country and the church that play out in surrounding events: separate vigils on the eve of the Beatification, separate Masses of Thanksgiving in the Cathedral on Sunday. Earlier in the week, the Committee of Mothers (CoMadres) named for Monseñor Romero, marched to the offices of the Attorney General to demand investigations into the murders and disappearances of their relatives.

The civil war ended with peace accords in 1992 and an internationally-mandated truth commission found that the Salvadoran government, armed forces and paramilitary death squads were responsible for more than 80 percent of the killings. Five days after the report was released and under threats of a new military coup, the Salvadoran legislature passed an amnesty law that prevented prosecutions. Though the murderers of Romero and many others are known, none of the perpetrators have been brought to justice.

The official church and the government call for reconciliation. But people want killers brought to justice. Only then will they consider forgiveness.

At the morning Mass upstairs in the Metropolitan Cathedral on Sunday, the Archbishop calls for reconciliation: “It is not easy, but neither is it impossible. Now we have our great Intercessor, the Blessed Monseñor Romero in heaven praying for us.”

Downstairs in the cathedral lies Romero’s tomb, watched over by La Comunidad de la Cripta. Here the masses and vigils are conducted by and for the poor. On Sunday, the crowd cheers wildly when a visiting priest from the poorest diocese in Mexico, the Sierra Tarahumara of Chihuahua — a place contested by rival narco-gangs and the Mexican army — said, “It gives me great pleasure to know that our Saint has finally been declared Blessed. It has been said that in the footsteps of Monseñor Romero, Christ himself walked in El Salvador. Perhaps today, thanks to the (belated) Beatification, Christ has walked in the Vatican also.”

During the Mass, a procession of visiting bishops from around the world, are escorted through the gathered worshippers to kneel at Romero’s tomb for a brief moment. They leave without a word to the people.

After the mass, a Muslim man kneels in prayer before Romero’s portrait.

Molly Molloy is a writer, librarian and Latin American specialist at the New Mexico State University Library in Las Cruces, NM. She is the creator and editor of the Frontera List, a forum for news and discussion of border and Latin American issues.

Crowdfunder: Teaching girls in Colombia how to code
Comment
Guest Voz: An anti-poverty movement doesn't look like what you think