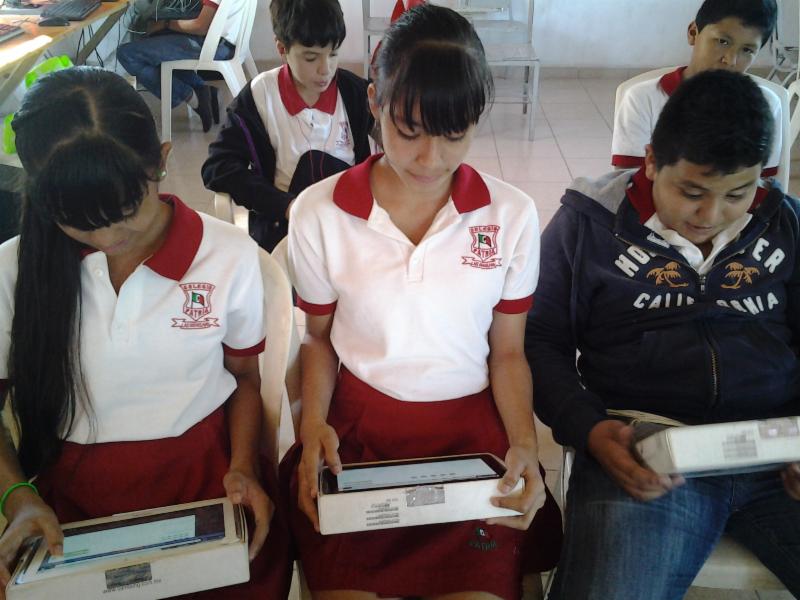 Fifteen years ago, two remarkable women in rural Mexico started a school on a shoe string. Now they have a savvy plan to take all their 160 students online.

The future is digital. Everybody knows it. Children without computer skills will have no chance in the coming world economy. BBC News reported on May 20, 2014 that Mexico ranked 34th of 34 countries in math education.

Kids who live in poor countries with low education budgets, like Mexico and most countries in Central and South America, suffer the greatest risk of being left behind. These children face a yawning digital divide between poverty and prosperity.

In January 2014, El Colegio Patria, a poor school in an agricultural pueblo in Mexico, started an online learning project. With 16 donated used computers (6 have since died) and 10 spanking new tablets, teachers started enrolling twenty students at a time in the Khan Academy.

The kids came after school, for an hour, every day, for three weeks. In that short time, they moved from no online learning skills whatever to masters of the site AND they fell in love with the beauty of math.

Now 107 students from Grade 3 to Grade 9 are learning math online from Salman Khan, one of the best teachers in the world.

English online is next. Then computer programming.

Other schools and underused computer labs in the region are already following the model. Campaign organizers want their success to be repeated. Integrating technology into education can give every Mexican kid a chance.

They’ve published all their resources for learning online on their bilingual website. Check them out at Khan Academy Matematicas.

To achieve their goal, they don’t need one tablet per child, but they do need more than 20 working computers. Before the next school year, they hope to set up one 5-tablet online learning station in each classroom. That will give them a flexible learning environment that includes both real and online teachers.

Students will be able to learn at their own pace, share ideas and work peer-to-peer.

The campaign lasts 45 days. Their goal is 45 tablets, one tablet a day.

45 tablets at $350 each,
20 keyboard cases at $75 each (to increase tablet productivity, effectively turning them into mini-laptops)
25 protective covers at $25 each so students can work outside of the box.