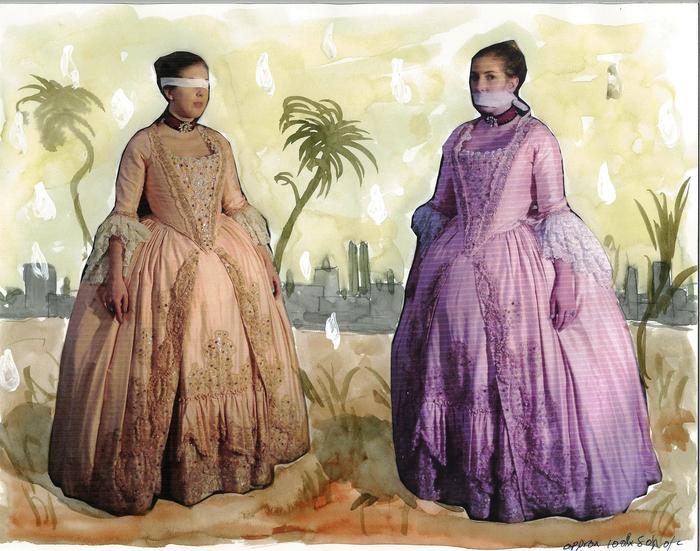 Francisco Benitez is a born and bred Santa Fe artist of Spanish, Native American and Puerto Rican background. He is developing an ambitious project which focuses on the colonial power structures and corresponding relationships of the southwest region.

The idea for the show came when Benitez was visiting his father in Madrid, Spain, last summer before he passed away. Strolling through the Prado, he saw a number of intriguing 18th century aristocratic portraits of women in outrageously flamboyant costumes, and imagined a visual, fictionalized account of such an aristocrat, transplanted to the New World, with her maidservant.

The idea evolved into a narrative about colonialism, identity and race. The exhibition is as much about the maidservant as it is the aristocrat. The maidservant is Native American, and the works in the exhibition will weave a story about her experiences and thoughts about living in a colonial household.

The exhibition is the record of those thoughts and her struggle. It is also about Doña Inés, the idiosyncratic aristocrat, who spends her days puffing on pipes, as aristocratic women did in those days, and running her household, only to find herself secretly vulnerable and lost in this new world and environment.

Benitez is a full-time artist who has been exhibiting professionally since the age of 20. Elated that the project proposal was accepted by the gallery exhibitions committee, he is now faced with a somewhat herculean project with expenses that are beyond his current reach.

He works in a small two-car garage, which has been fine for production of most of his medium-size paintings; but for this show, he needs to get a larger space in which to work for at least the four months preceding the show. He will also be using his two models who need to be paid and has art materials expenses, transportation costs, and video production costs.