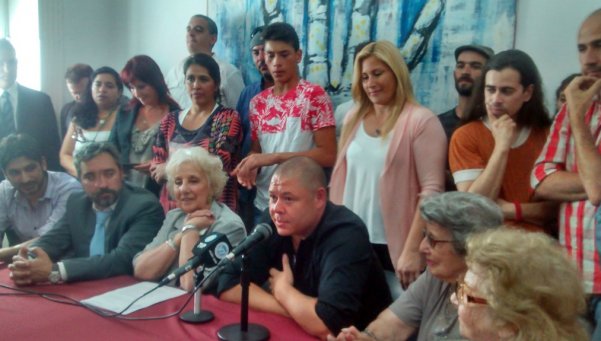 LatinaLista — Update: Today, the long-awaited reunion between Mario Bravo and his mother took place in Buenos Aires, Argentina. New details about Bravo's mother have been made public by the Abuelas de Plaza de Mayo.

His mother's name is Sara (her last name is being withheld for privacy reasons) and she was born on January 25, 1956 in Tucumán, Argentina. In 1975, she worked at a hotel in the capital of the Tucumán province, where she lived with her two daughters, ages 3 and 1.

In  July of 1975, upon returning from work in the early morning, a car stopped outside her home. The car's occupants took her away, first to a commissary, later to a police station and lastly to the Villa Urquiza jail, where she became one of the disappeared-detained. She gave birth to Mario while in jail, between May and June, 1976. The baby was taken from her immediately by a nurse and Sara never saw her son again.

In November 1976, she was freed on the edge of a cane field and from there she walked to a hospital where she stayed until she could return home.

Threatened with her own death, Sara lived terrorized. However, 30 years later, thanks to an acquaintenance and accompanied by the group H.I.J.O.S, Sara was put in touch with the Secretary of Human Rights of Tucumán, in 2004 where she began the quest of looking for her son. In 2007, her bloodwork was registered at the National Genetic Bank (BNDG) with the hope of finding her son.

Meanwhile, Bravo was doing his own search. From an early age he suspected that he was not the son of those who raised him and although he never confirmed this doubt, other people around him knew of his situation. Registered as born in 1977 in a village in the province of Santa Fe, Bravo's doubts over his birth continued to grow.

In August, Bravo had his blood drawn and an order was placed at BNDG to check his blood against the database. On November 19, Bravo's blood confirmed he was Sara's son.

Today, Mario Bravo discovered that he has several siblings and is an uncle to numerous nieces and nephews, who have reached out to him via social media.

During his press conference, he said he is looking especially forward to this Christmas though his bill just got higher.

An early Christmas has come to Argentina's Abuelas de Plaza de Mayo. At a press conference scheduled for Tuesday, December 1, the group of grandmothers, who have made it their mission to find the estimated 500 grandchildren reported as kidnapped during the country's military dictatorship that lasted from 1976 to 1983, will announce that another missing grandchild has been found.

Though over 30,000 people met early deaths at the hands of the regime in power, their kidnapped children, in most cases, are still alive and don't even realize their abuelas are looking for them — until they're found!

According to announcements from the non-profit group, grandchild #119, a 38-year-old grandson, has been found thanks to comparisons of his genetic data to those of his mother's.

What makes this case especially heartwarming is that the boy's mother is still alive; his father remains missing. It's the second case where child and mother have been reunited through Abuelas de Plaza de Mayo.

While the group didn't plan on releasing the names of son and mother until the press conference, social media broke the news. Mario Bravo is the man's name. His mother gave birth to him while in government custody where he was taken from her immediately after his birth.

"I've talked with my mother over these past few days and she is remembering these very difficult times," Mario told the Argentine press. "She told me that she was released after two years of captivity but was always threatened to never talk about what happened to her."

In fact, it wasn't until she spoke to her son by phone that Mario's mother made a new discovery.

"Today, I heard your voice and when you were born, I only heard your cry. I didn't know if you were a boy or a girl," Mario shared what his mother told him.

At the press conference, mother and son will be reunited in Buenos Aires for a long-awaited reunion.

35 years later, Latinos with HIV fight for another kind of justice
Comment
Maquila group tries to lure Reynosa kids away from a life of crime