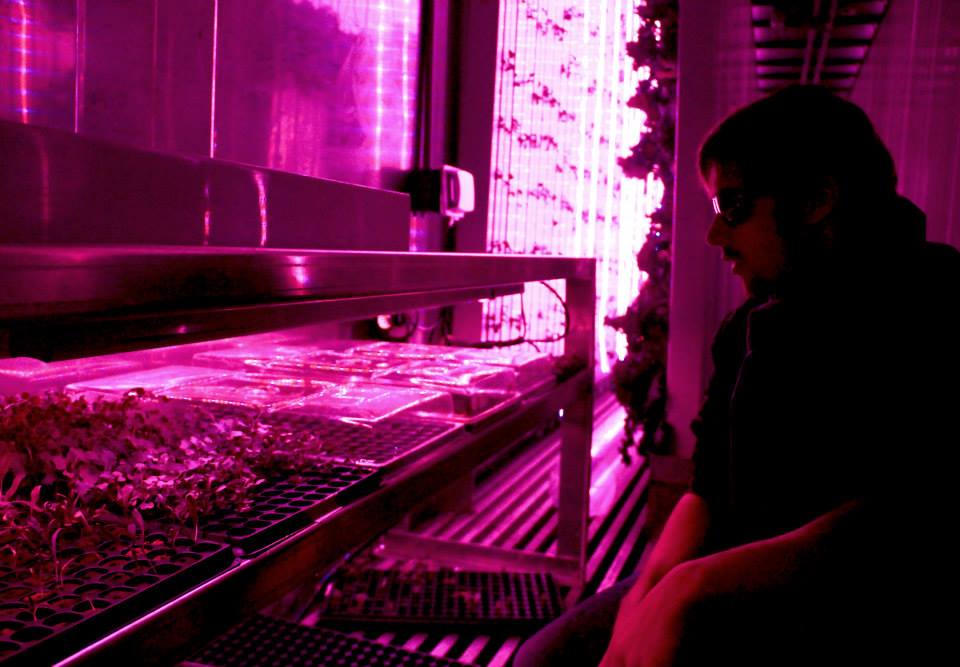 I first met Mitch Hagney in an empty parking lot behind an abandoned warehouse on the outskirts of downtown San Antonio, Texas. His friendly smile and firm handshake lend to his unassuming presence as a young professional. The only hint that there’s more to the story is found in his NASA belt buckle.

On paper, he’s the CEO of Localsprout. But in real life, Mitch Hagney is Urban Agriculture’s answer to Batman.

I first heard of Mitch’s project through a mutual friend. “He has a hydroponic farm in a 40 ft. shipping container,” was all I needed to hear. I had to meet this guy. After a brief exchange of emails and phone calls, I found myself following Mitch through the empty parking lot toward an unmarked door with a push-button keypad lock, on the backside of the abandoned warehouse.

“Give it a minute, your eyes will adjust,” Mitch said as we entered the dark warehouse. I can’t help but feel like I’ve entered the Batcave as Mitch leads me toward a still dark corner of the warehouse. “This is my space,” Mitch said, “Sometimes I sleep in a tent when things are needing my attention here.”

After opening the door, Mitch invites me to step inside the dark, cold container. “It’s night time for our plants right now,” he said, “We keep the lights on at night because it’s the cooler part of the day. The plants sleep during the day, because it’s typically warm. We use less energy this way.”

After powering up his laptop, Mitch is able to turn on the lights in the container and I finally take in the full magnitude of this incredible project.

With the door behind me, a germinating station is attached to the wall directly in front of me. Here, Mitch and Sam germinate seeds, raise sprouts and harvest amazing plants from the growing media.

Above the work station, an A/C unit keeps the container at a constant temperature. Condensation from the unit is captured and sent to one of the 300-gallon holding tanks at the back of the container.

Attached to the wall to my left, are the brains of the operation — constantly monitoring the temperature, CO2 levels, water flow and nutrient levels.

Mitch can access this information on his mobile device through an app and make any necessary adjustments. “This container was the second of its kind sold in the US. So, it’s a bit glitchy,” he said, “We are constantly thinking of new ways to innovate this technology for the future.”

To my right, nearly an acre’s worth of plants are grown vertically in less than 400 square feet, in two rows facing each other on either side of a single, center aisle. Kale, basil and other herbs are placed in a growing media hanging from the ceiling. Water lines deliver nutrient-rich water to the media as gravity pulls the water through the root system. Red and blue LEDs feed the plants the light colors they desire most. “Giving them white light,” he said, “or any light they don’t want, is a waste of energy.”

As a for-profit business, Localsprout sells the majority of its produce to local restaurants. After taste-testing some amazing kale and basil, I asked Mitch about the future of Hydroponics.

“Greenhouses are probably the way to go. They tend to be more cost-effective,” he said, “But what I’m really interested in is using this technology to grow sustainable food and oxygen on Mars.”