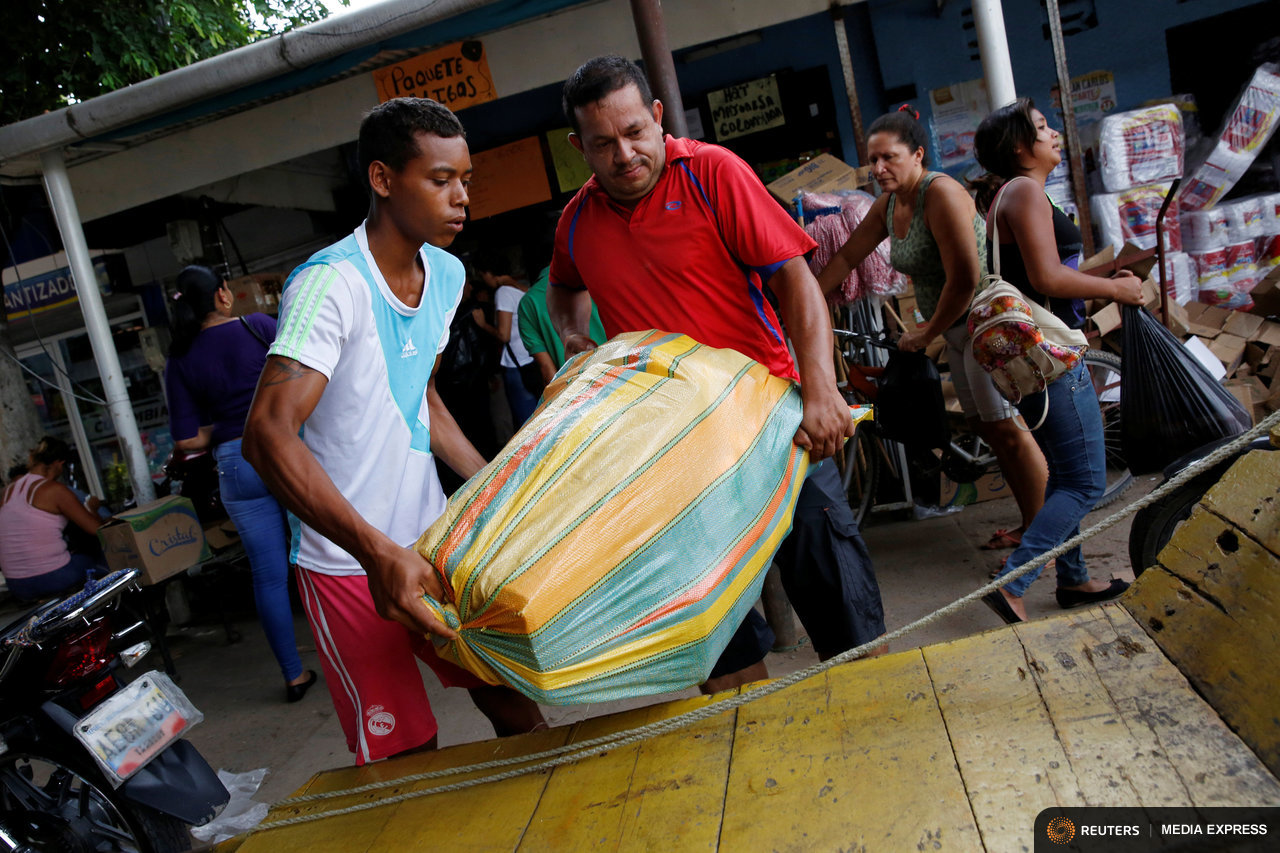 PUERTO SANTANDER, Colombia – Thousands of Venezuelans living near the border discovered years ago that smuggling heavily subsidized food into Colombia made them far more money than the meager wages from regular jobs.

But with crisis-hit Venezuela suffering drastic food shortages this year and local resale prices spiraling, some have decided to flip the business model: zipping into Colombia to buy flour, rice and even diapers for desperate shoppers back in Venezuela.

“There’s nothing left in Venezuela, what’s left is hunger. Colombia is what’s saving us,” said one 30-year-old smuggler who now rides his motor bike to shop in Colombia’s buzzing border town of Puerto Santander.

“Colombia is what is saving people,” said the smuggler, a former construction worker who asked to remain anonymous to avoid arrest. He says he keeps some food for his wife and three children but sells most of it to markets in Venezuela’s Andean border state of Tachira or in the capital, Caracas.

But the about-face in smuggling routes in the last few months was clear one morning late last week when Reuters journalists saw hundreds of people streaming into Colombia to buy food, medicines, and basic hygiene products.

Dozens lined up on a bridge to plead with the military to let them through. Others drifted over in wooden boats right under the nose of Venezuela’s National Guard and army. A half-dozen said they bribed officials to cross over dirt roads, and a few swam from one leafy shore to the other.

The business is driven by Venezuela’s worsening economic crisis. Poor and middle-class people brave food lines for hours but increasingly end up empty-handed. Many are forced to skip meals and survive on mangoes and plantains, or forage through garbage.

Unruly supermarket lines have become riskier and a woman was shot dead in Tachira this week after frustrated shoppers raided warehouses.

Venezuela’s opposition is pushing to have Maduro removed via a recall referendum, saying it is the only way to avert a full-blown humanitarian crisis in the oil-rich country.

“There’s nothing in my fridge,” said Gloria, 48, who got up at 4 a.m. on a recent morning to travel to Puerto Santander to buy rice, sugar and coffee for her family of eight.

“In the last month the situation has become more critical, we can’t find anything,” she said, taking a break from carrying heavy shopping bags.

Before shoppers like Gloria began showing up, Puerto Santander was suffering a downturn as Maduro’s border crackdown and Venezuela’s scarcities had dimmed the inflow of cheap goods smuggled in from Venezuela.

To be sure, children, gangs, and even middle-class Venezuelans continued to smuggle Venezuelan gasoline – the world’s cheapest – across the murky brown rivers that mark the 2,300-km (1,400-mile) border.

But it is the reverse flow of goods that has Puerto Santander’s once-shuttered stores humming again.

Venezuelans drag bulky bags or suitcases down busy streets, shoppers with fistfuls of Venezuelan bills elbow their way to counters, and Colombians on motor bikes offer their services.

“Thanks to the fact there’s nothing in Venezuela this town has shot back to life,” said store owner Jose Armando, 42, who now sells Colombian-made products to exclusively Venezuelan customers.

COLOMBIAN PRODUCTS – OR NOTHING

On the other side of the border, Venezuelan shoppers are scooping up Colombian goods.

Once out of reach, many goods have become a bit cheaper than the scarce and pricey Venezuelan products hawked locally by “bachaqueros” – resellers named for an industrious leaf-carrying ant.

Rice, for instance, can be bought in Colombia for the equivalent of about 1,300 bolivars and sold in Venezuela for around 1,800 bolivars.

Venezuela’s government fixes a kilo of rice at some 120 bolivars, but on the local black market the coveted product now fetches approximately 2,000 bolivars – just $2 at the unofficial foreign exchange rate but around one-fifth of a monthly minimum wage, factoring in monthly food tickets.

For two months now, Clarissa Garcia, 37, has bought Colombian soap, flour and sugar to sell in her small stall at the market of La Fria, a leafy town a half-hour drive from the border.

“People would be dying of hunger if there weren’t Colombian products,” she said, washing tomatoes as shoppers streamed by inquiring about prices. Some grimaced at her response.

Venezuela’s poor, and those who live far from the border, have no choice but risk ever longer and more dangerous lines in front of supermarkets patrolled by National Guards soldiers where scuffles are now common.

By 7 a.m. on a recent morning in San Cristobal, the capital Tachira, some 2,000 shoppers were waiting in front of a supermarket hoping to be among the lucky few able to buy soap and flour when its doors opened.

“We can’t stand this anymore,” said Talia Carrillo, 38, who arrived the night before, slept in the line, and woke up in the morning to find others in line being robbed.

“I earn minimum wage. That doesn’t give us the base to buy expensive products. But we can’t go on like this, we’re barely finding anything.”

In America, domestic extremists are a bigger risk than foreign terrorism
Comment
Video campaign hopes to inspire Latino Millennials to save a life