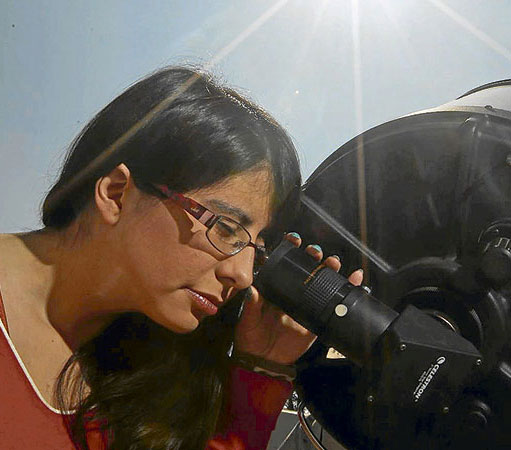 LatinaLista — Barely 25 years old, Maritza Soto made history recently when she discovered a new planet. The young Chilean astronomer, who is working on her PhD in Science, at the University of Chile, knows that not many Chilean astronomers get to be as lucky in making a discovery of her magnitude.

The newly discovered planet is 0.6 times the distance to its star than the Earth from the Sun (roughly the distance from the sun to Venus).

“It is a gaseous planet and takes 130 days to orbit its star,” Soto said. “The entire system is 290 light years away from us.”

Soto has been fascinated by the celestial heavens since she was a child and her favorite books were encyclopedias and astronomy books. It wasn’t until she started school and discovered she had a talent for mathematics and physics that she realized that her childhood fascination with stars could actually be a career she could pursue.

Solo’s discovery of the planet is part of a larger project and team effort into the formation of planetary systems, conducted at La Silla observatory. The project included analyzing data from five stars known to have a nearby confirmed planet. After 8 months of combing through the data, the discovery was made of planet HD110014.

Researching the formation of planetary systems is a relatively new field and one that not only excites Soto about potential discoveries but future opportunities for the next generation of astronomers in Chile.

“I would say that it is possible to be a scientist in Chile, they just have to work hard and study, and with perseverance they too can achieve a major discovery for science”.

Commentary: Let’s Treat Juveniles in Detention at Least as Well as Animals in Zoo
Comment
Guest Voz: The High Cost of Truancy