Latina Lista: News from the Latinx perspective > Palabra Final > Immigration > 8-year-old frightened by ICE agents making a point they had guns when inside home

LatinaLista — Regardless of where one stands on the issue of guns, there’s no getting away from one fundamental fact when guns are looked at in the context of law enforcement: Guns are a sign of force but they are also a sign of intimidation. 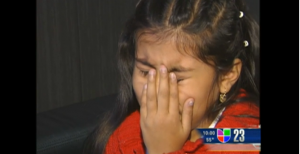 That fact was made frighteningly clear to 8-year-old, Mariel Lopez, who found herself facing Immigration and Customs Enforcement agents who had arrived at her Dallas home to take her undocumented pregnant mother into custody to be deported to Mexico.

In a tearful recount to her family’s lawyer of what happened when ICE agents entered her home, on the pretext of looking for a man wanted by the FBI, Mariel said that she got scared when agents kept resting their hands on the butts of their guns as they barked orders to Mariel, her little sister, 12-year-old brother and her parents.

What made things even worse was that the ICE agents are alleged to have identified themselves as Dallas police officers. Now, Maribel and her siblings are so afraid of police that the family’s lawyer has arranged for a real Dallas police officer to come and visit and talk with the children and explain they shouldn’t be afraid of the police.

Many times, when discussing the gun issue, the focus is on the criminals who illegally acquire guns to commit crimes. Rarely, is the issue of how law enforcement agents handle guns when not in life-or-death situations.

Sure there are many law enforcement officers who know how to properly “wear” a gun so they are not seen as intimidating but making a show of their guns to children to serve as a non verbal threat is as much a misuse of gun possession as someone who acquires a gun illegally.

What this unfortunate incident exemplifies is that responsibility in handling a gun exists for whoever has it.