Latina Lista: News from the Latinx perspective > Palabra Final > Diversity > Alabama’s passage of most cruel anti-immigrant law harkens back to state’s racist past

LatinaLista — According to Merriam-Webster, the word “reform” has these three top meanings:

1a : to put or change into an improved form or condition
1b : to amend or improve by change of form or removal of faults or abuses

2: to put an end to (an evil) by enforcing or introducing a better method or course of action

3: to induce or cause to abandon evil ways 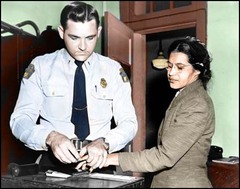 It’s clear by definition that the word has a positive connotation. Reform isn’t supposed to be oppression. Wikepedia includes in their definition of “reform”:

Reform seeks to improve the system as it stands, never to overthrow it wholesale.

Rosa Parks having her fingerprints taken by Alabama police after her arrest on December 1, 1955.

In Alabama, an anti-immigrant measure was signed by the Governor into law this week. Supporters of the new law say that the law shows Alabama is “the leader in comprehensive immigration reform.”

Yet, this law contradicts the very definition of reform and is even worse than Arizona’s infamous SB1070 in how it persecutes Latino immigrants. The Alabama law bars undocumented immigrants from enrolling in or attending college; prohibits them from applying for or soliciting work; and makes it illegal to rent them property.

It requires police, in the course of any lawful “stop, detention or arrest,” to make a “reasonable attempt” to determine a person’s citizenship and immigration status, given a “reasonable suspicion” that the person is an undocumented immigrant.

It will require public elementary and high schools to determine who among their students are undocumented. The schools won’t be required to expel the students but have to submit an annual report on the number of undocumented students enrolled.

The law bans undocumented immigrants from receiving any state or local public benefits.

It outlaws harboring and transporting undocumented immigrants, renting them property, and “knowingly” employing them for any work within the state. It also makes it a “discriminatory practice” to fire or fail to hire a legal resident when an undocumented one is on the payroll.

And next year, all businesses will be required to use E-Verify to confirm their employees can legally work.

Opponents of the law have called it “draconian.” That’s an understatement. At its very core, this law is unusually cruel in how it especially targets children and young people.

Yet, this is Alabama. A state that obviously never learned the lessons of the Civil Rights era or have enough throwbacks from that time in the state legislature that they decided they were going to get it right this time when it came to targeting people of color within their borders.

If there is any kind of hope that comes with this law it’s the fact that it just might be the impetus to halt this kind of backward thinking and punitive legislation emanating from state legislatures across the country.

After all, the Civil Rights movement didn’t start gaining real momentum until a certain black woman named Rosa Parks boarded a bus in Montgomery, Alabama and refused to give up her seat.

While Ms. Parks has come to symbolize the Civil Rights era, Alabama has not been as fortunate in shedding its racist past. Passage of this law only reinforces that image.

It may not be until we see or hear about an undocumented student’s attempts to thwart the law by trying to enroll in college or the arrest of an Alabama resident giving a lift to a family of undocumented immigrants before people realize that laws like this one have no place in US society — and are far cries from the true meaning of reform.

Previous Post The sad, mysterious and predictable murder of Evelia Valencia
Next PostLed by a grieving poet, Mexico's Caravan for Peace with Justice and Dignity serves as largest unified display of citizens' unrest with country's violence

The sad, mysterious and predictable murder of Evelia Valencia
Comment
Led by a grieving poet, Mexico's Caravan for Peace with Justice and Dignity serves as largest unified display of citizens' unrest with country's violence