As another Texas election campaign heats up, state’s Latinos find themselves (again) the butt of GOP politics 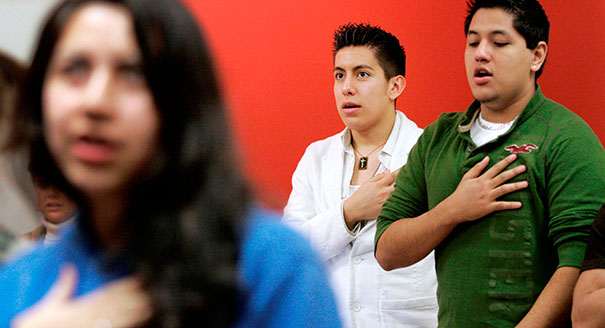 LatinaLista — This year marks 32 years living in Texas, and after all this time, I’m still surprised and insulted at the lack of respect state politicians unashamedly display towards Latinos in the Lone Star State.

In a state whose history is among the most intertwined with that of Mexico, and where 38 percent of the population is of Latino descent — on track to being the state’s majority in ten years — it puzzles me that too many GOP political candidates will publicly refer to Latinos in derogatory terms.

No doubt the political apathy of Latinos that has reared its ugly head with every state and local election has empowered Texas GOP politicians to indulge in Latino trash-talking. A recent Gallup poll found that the Texas GOP feels no fear from Latinos at the voting booth for the foreseeable future.

And that’s a shame.

If state politicians felt half as accountable to Latino voters as they do to Tea Party factions then asinine comments from politicians running for state offices probably wouldn’t happen half as often or be as insulting.

The latest Texas GOP politician, who prefers to turn a blind eye to the 38 percent, has historically been one of those who felt comfortable saying what he wanted about Latinos because they weren’t his voter base. To his surprise, his latest insensitive remarks riled some Latinos enough to push back.

This politician’s words wouldn’t mean so much if he just represented a district but he wants to represent the whole state of Texas.

Texas Attorney General Greg Abbott is hoping to replace Rick Perry as the governor of the Lone Star State. While past governor races have received barely a yawn, this one has already attracted national scrutiny. Not because of Abbott, but who one of his possible opponents is — Wendy Davis.

To emphasize to his voter base just how conservative he is, he’s been on the campaign trail reiterating one of the favorite talking points of his party, border enforcement. In a speech about his ideas for public safety that he delivered in Dallas recently, Abbott elaborated on the growing influence of Mexican drug cartels in Texas by singling out law enforcement corruption in several border communities.

He said, “This creeping corruption resembles third-world country practices that erode the social fabric of our communities and destroys Texans’ trust in government.”

Abbott knows Latinos are the majority of residents in these counties. His remarks drew swift rebuke from Democrats, residents of the Rio Grande Valley and Latino leaders throughout the state. An editorial in McAllen’s The Monitor admonished:

Abbott, more than most, understands the power and nuance of the English language. After all, he’s the state’s top lawyer and a former jurist who sat on the Texas Supreme Court — two jobs that require a keen understanding of the need for precision in language.

So there is no doubt that the comparison of corruption in South Texas to third-world countries — made in prepared remarks — was intentional and highly nuanced.

There is also no doubt that Abbott would not have made a similar comparison to third-world countries had he been talking about corruption in Dallas or Houston.

…As we have said on our Opinion page several times before, this year’s election should not fall into that traditional zone of venomous nativist rhetoric that inflames the passions of white conservatives at the expense of the state’s growing Hispanic population.

Abbott has been guilty of such practices in the past and we need to declare as a region that we are tired of having Hispanics act as the bogeymen of Texas.

Predictably, Abbott has gone on the defensive. He published an op-ed declaring it wasn’t his intention to refer to this area of Texas as “third-world.”

But he did and as his campaign heats up, it’s assumed that it will be open season on Texas Latinos yet again — unless something changes.

It’s a change that calls for Latinos, regardless of party, calling out those politicians who think it’s to their political advantage to negatively portray Latinos as the cause of the state’s problems. It’s clear this indignation should be one of the driving forces to motivate Latino voters to go to the polls to put a stop to being used as the butt of Texas GOP politics.

It’s something Wendy Davis is hoping for.

In a meeting with the Dallas Morning News editorial board, Davis said Texas is misportrayed as a “red” state. According to Davis, Texas is “actually a non-voting state. She says she can win by waking up all those sleeping non-voters out there.”

Abbott, and politicians like him, are making her job a lot easier.