LatinaLista — There have been a number of films made about forced prostitution but one that remains on my list of favorites is Taken. It’s a story about a retired CIA agent whose daughter is kidnapped while on vacation in Europe and sold into prostitution. The father goes to rescue his daughter before she permanently disappears in the underworld of human trafficking. 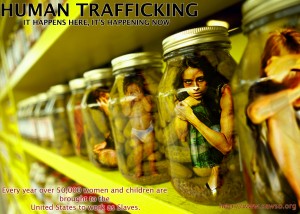 In the film, we see a father who is solely focused on rescuing his daughter and will not let old friendships or even the law stand in his way to find her. When told by a wealthy prostitute broker that it was “nothing personal, just business” that he sold his daughter, the father replied, “it was all personal to me.”

Modern-day slavery should be personal to everyone who learns of it. It’s that sentiment that needs to be remembered during this month and, particularly, on this day dedicated to National Slavery and Human Trafficking Awareness.

There are more slaves today than in any other time in history with about 27 million people being trafficked each year contributing to a $32 billion industry.

Every day in the United States and around the world, men, women and children are bought, sold and exploited for profit. They are trafficked throughout the United States into the commercial sex industry, farm labor, domestic work, restaurants, hotels, construction work and other low-wage industries.

Enslaving people is an abomination that has been one of the darker stains on our nation’s history. It is ironic that 150 years after the Emancipation Proclamation was enacted to free the slaves that this country is still dealing with slavery.

Unlike Lincoln, who was a champion for the Emancipation Proclamation, today’s slaves haven’t received the same kind of support from Washington. Last year, Congress didn’t reauthorize the Trafficking Victims Protection Act and chose to let it expire when passage of it could have helped those already caught in the slave trade and helped keep others from joining it.

A coalition of U.S.-based human rights organizations dedicated to eradicating human trafficking called Alliance to End Slavery and Trafficking (ATEST) released a report titled A Path to Freedom that offers “a roadmap for the second-term Obama Administration to follow as it works to realize its commitment to eliminate human trafficking, forced labor and all forms of modern-day slavery.”

Though the U.S. Department of Homeland Security has created the Blue Campaign to help heighten awareness of the issue among the public and encourage people to report it if they suspect someone is being victimized, more can be done to get the public involved.

But it requires Washington to take the lead and show the global community that this nation takes the issue seriously and doesn’t plan to repeat the mistakes of the past.

featured, human trafficking, modern-day slavery
Previous Post Volunteering for a cause gets the New Year off to a fulfilling start
Next PostViernes Video: Latina filmmaker film garners premiere at this year's Sundance

Volunteering for a cause gets the New Year off to a fulfilling start
Comment
Viernes Video: Latina filmmaker film garners premiere at this year's Sundance