LatinaLista — News reports show President Obama speaking to rallies today in a raspy voice on the verge of laryngitis. Other news reports say former Gov. Romney is now using tele-prompters at his rallies to avoid making mistakes due to his nonstop campaigning. 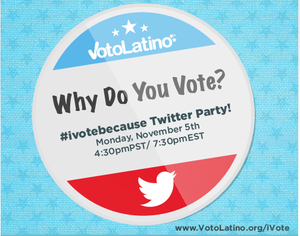 If we think we are tired of this continual campaigning, we can only wonder how these candidates and their families feel. But whatever the outcome, these two men are doing their part in a democratic electoral process by campaigning. The public’s part is to vote.

For too long, we have been told that voting is a privilege but that’s not entirely true. It’s a duty.

It’s a duty because without voting our country would be a dictatorship or a Communist country where one person, one party would be able to keep all those who disagreed with him/her/them in a constant state of suppression.

It’s a duty because without voting the will of the people, regardless of their candidate winning or losing, would not be made known.

It’s a duty because voting is what keeps democracy moving forward.

Tonight, there are twitter parties happening to encourage people to vote. Sites are being set up for people to report if poll workers keep them from voting, videos have been created to impress upon people about the importance of voting, and there are incentives being created to spur people to vote.

The bottom line is we must vote.