LatinaLista — It’s only been a year since the 2010 Census showed which states had grown in population and which were losers when it came to adding congressional seats. The ink is hardly dry on some of those states’ redistricting maps and yet, found in the U.S. Census’ latest data, some states are still experiencing population growth. 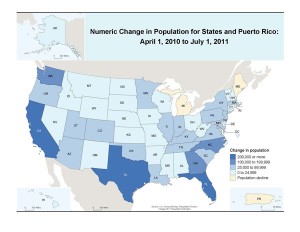 According to the data, Texas is the preferred destination followed by California, Florida, Georgia and North Carolina.

Three states did lose even more of their residents: Rhode Island, Maine and Michigan.

And while the population increased by 2.8 million over the 15-month period, to 311.6 million, according to U.S. Census officials it’s the lowest population growth since the mid-1940s.

The nation’s overall growth rate is now at its lowest point since before the baby boom,” said Census Bureau Director Robert Groves

Previous Post Guest Voz: Before U.S. advises other nations on how to practice democracy, it must start at home — with Puerto Rico
Next PostCarving Guadalupe

In only five years, Latinos will account for over 40% of the increase in U.S. employment

Guest Voz: Before U.S. advises other nations on how to practice democracy, it must start at home — with Puerto Rico
Comment
Carving Guadalupe