LatinaLista — With the ongoing excitement over the Deferred Action program for DREAMer students, it’s hard to remember (outside Arizona) that there are some states still trying to enforce their own versions of immigration law. 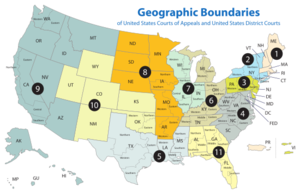 A couple of the most recent states that joined with Arizona were Georgia and Alabama. And like Arizona, they were taken to court. Today, the federal 11th Circuit Court of Appeals ruled on the recent immigration laws passed in both states.

In a series of decisions issued Monday afternoon, a federal appeals court in Atlanta struck down major portions of controversial immigration laws passed by Alabama and Georgia — including a provision requiring public school officials to determine the immigration status of newly enrolling students.

However, the court ruled that Georgia can enforce the infamous “show me your papers” provision allowing local police to investigate the immigration status of suspects, but the court made it clear that Georgia officials do so at their own risk:

“Reliance on race, color, or national origin that is constitutionally prohibited, however, is expressly forbidden by the Georgia statute,” the court said in its 33-page ruling, released Monday.

“It is inappropriate for us to assume that the state will disregard its own law, and we therefore reject the argument in this respect, keeping in mind that unconstitutional application of the statute could be challenged in later litigation.”

The court also put another provision of the immigration law on hold: punishing people who knowingly transport or harbor undocumented immigrants while committing another crime.

From the court’s ruling, it’s obvious that it views the portions of the immigration law it let stand as balancing on a very thin ledge between what is constitutional and unconstitutional.

Fortunately, there’s no such thin line between what is right and what is wrong.