Gingrich and Santorum guilty of wrong assumptions about Blacks, Latinos and food stamps

LatinaLista — It wasn’t that long ago when every GOP candidate for President, and those in Congress, would scold Obama for creating a “class” war by calling attention to the 1 percent vs 99 percent. Yet, in recent debate rhetoric, two candidates, Rick Santorum and Newt Gingrich, are being called out by the Catholic Church for doing the exact same thing. 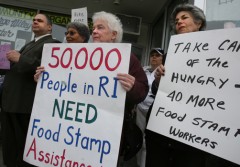 In the last couple of debates, both men, who happen to share in the Catholic faith, have called attention to the less fortunate in the nation by blaming them for their own plight.

Newt Gingrich has frequently blasted President Obama as a “food stamp president” and implied that some African Americans are more content to collect welfare benefits than work. Rick Santorum attracted scrutiny for telling Iowa voters he doesn’t want “to make black people’s lives better by giving them somebody else’s money.”

As a result of the racist rhetoric, more than 40 national Catholic leaders and prominent theologians at universities across the country issued a strongly worded open letter today urging “our fellow Catholics Newt Gingrich and Rick Santorum to stop perpetuating ugly racial stereotypes on the campaign trail.”

An Associated Press (AP) story published today profiles current food stamp recipients and highlights the fact that hard times don’t recognize color or ethnicity, though in separate data it’s been acknowledged that both Blacks and Latinos have suffered disproportionately in job losses since the start of the recession.

Yet, when it comes to collecting food stamps, unlike what Gingrich and Santorum would have voters believe, Blacks and Latinos are not the first in line.

In 2011, more than 45 million people – about one in seven Americans – received benefits from the federal Supplemental Nutrition Assistance Program, the most ever. Fewer than 31 million people collected the benefits about three years earlier.

Forty-nine percent of recipients are white, 26 percent are black and 20 percent are Hispanic, according to Census data.

While Santorum and Gingrich should be challenged for their remarks, they should also be asked an important question: Why do you think minorities receive more in public assistance when it’s obviously not the case?

It will be obvious just how embedded are discrimination and prejudice among the Anglo populace. It’s so embedded that even someone aspiring to lead a richly diverse nation already holds in contempt certain groups of people based on nothing more than assumptions, and wrong ones at that.

As voters, we should ask ourselves if we want a leader who deals with facts or assumptions.

The last time we had a President that acted on assumptions proved to be a nightmare for the country.