LatinaLista — The GOP may say they want Latino voters but their latest actions have hammered the last nail in the proverbial coffin of sincerity that they mean it. Today, in Tampa, Florida, the Republican platform committee met to finalize the party’s campaign platform. 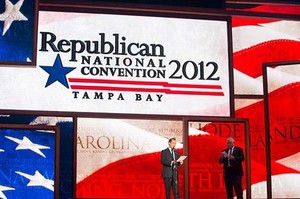 Politico reports that Kansas Secretary of State Kris Kobach, the author of Arizona’s infamous SB1070, persuaded his colleagues to adopt his proposals:

The platform committee overwhelmingly voted to add language proposed by Kobach calling for the completion of a border fence, the end of in-state tuition for illegal immigrants and an end to sanctuary cities. It also voted to support national E-Verify, an Internet database run by the federal government that makes it harder for undocumented workers to get jobs.

The committee’s actions today have already drawn a swift warning from Ambassador Andrew Young, who was instrumental in passing the Voting Rights Act of 1965. He released a statement saying in part:

“I’m against voter fraud in any form and I have long supported a national voter ID card. But ID cards need not — and must not — restrict voting rights in any way, shape or form. Therefore, voter ID cards must be free and readily accessible to everyone in our democracy. Otherwise we have lost our democracy once again.”

The Politico article points out that “the committee agreed to restore 2008 platform planks that didn’t appear in a draft prepared by Republican National Committee staff, who worked in close consultation with Mitt Romney’s campaign.”

In essence, the committee has decided to make Mitt Romney’s job a lot harder in trying to prove to Latino voters that the GOP party reflects their values and wants to address those issues important to them in a humane and compassionate way.

Unless the Romney campaign challenges the newly adopted platform, the GOP committee is helping bring home the fact that this race is about a fundamental difference in philosophy in the direction of the country — and how we deal with change in the nation.