LatinaLista — Immigration enforcement is not an issue that can just be reduced to the black and white rationale of being the “law of the land.” 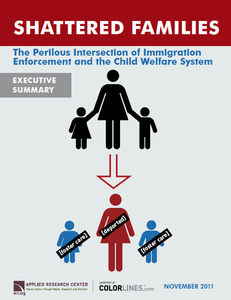 Though it’s true that immigration enforcement entails finding people who are in the country illegally and deporting them back to their native countries, it’s much more complicated than that.

Too many times, because of decades old immigration policy preventing undocumented immigrants from easily returning to their home countries once their work was done in the US, all those immigrants who would have traveled back of their own free will, stayed here, married and had children.

Their children are US citizens, even if they may not be. As a result, when the parents are picked up by immigration authorities and deported, the children get left behind.

A groundbreaking report released today by the Applied Research Center titled Shattered Families: The Perilous Intersection of Immigration Enforcement and the Child Welfare System found that as a result of current immigration enforcement measures there are at least 5,100 children currently living in foster care who are prevented from uniting with their detained or deported parents.

The authors of the first national investigation on the subject identified 22 states where the children of deported immigrants are languishing in those states’ foster care system.

It’s a scenario that shouldn’t exist but, according to the report, is only expected to grow:

The current political climate makes these kinds of separations far too easy.

In areas where local police aggressively participate in immigration enforcement, children of noncitizens are more likely to be separated from their parents and face barriers to reunification.

For example, in counties where local police have signed 287(g) agreements with ICE, children in foster care were, on average, about 29 percent more likely to have a detained or deported parent than in other counties. The impact of aggressive immigration enforcement remains statistically significant when our research controls for the size of a

county’s foreign-born population and a county’s proximity to the border.

To add insult to injury, the report reveals that those undocumented immigrants who are victims of domestic and gender-based violence are not given the kind of considerations that US citizens enjoy when enlisting the help of police against their abusers.

Immigrant victims of domestic violence and other forms of gender-based violence are at particular risk of losing their children. Approximately one in nine of the stories recounted to ARC in interviews and focus groups involved domestic violence.

As a result of ICE’s increased use of local police and jails to enforce immigration laws, when victims of violence are arrested, ICE too often detains them and their children enter foster care. Many immigrant victims face an impossible choice: remain with an abuser or risk detention and the loss of their children.

The report points out that once children are separated from their parents it’s a hard, nearly impossible road to reunification.

And that shouldn’t be the case — not in this country that puts such a high value on the family unit.

If anything needs to be done, the report suggests:

These policies should stop the clock on the child welfare process and the immigration enforcement process to ensure that families can stay together and allow parents to make the best decisions for the care and custody of their children.