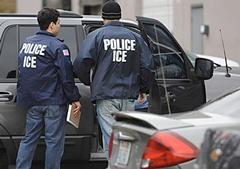 It’s a program that many were lead to believe would only go after “criminal aliens,” those who pose a serious safety threat to residents. In most people’s minds, the term “criminal” applies to murderers, rapists, robbers, etc. — not dairy farmers.

In the following commentary, published today in the Denver Post, Julien Ross, executive director of the Colorado Immigrant Rights Coalition, explains what happened when ICE raided a local dairy farm at the beginning of June.

As he points out, the impact of the raid has far-reaching repercussions for not just the dairy workers, their families and their employer but also the local economy and citizens’ trust in our government.

By Julien Ross
Did a recent raid on illegal immigrant workers go too far?

In the early morning of June 1, U.S. Immigration and Customs Enforcement (ICE) and local and county law enforcement officials entered the homes of workers from Wildcat Dairy in Fort Morgan.

While terrified children and spouses looked on, ICE arrested 11 dairy workers whose primary job is to milk, feed and clean up after the dairy’s cows. These workers were not charged with civil immigration violations, but instead are facing felony charges of criminal impersonation and forging documents.

This raid is deeply alarming to the immigrant community and its allies in Colorado.

First, the raid is a direct contradiction of the Obama administration’s stated enforcement goals. In 2009 testimony to the Senate Judiciary Committee, Homeland Security Secretary Janet Napolitano stated, “ICE will focus its resources within the worksite enforcement program on the criminal prosecution of employers who knowingly hire illegal workers in order to target the root cause of illegal immigration.”

In a 2010 memo to all ICE employees, Assistant Secretary John Morton stated, “Aliens who pose a danger to national security or a risk to public safety shall be ICE’s highest immigration enforcement priority.”

In Fort Morgan, however, unilateral action was taken against dairy workers who appear to have had no criminal history and pose no danger to the community. No enforcement action, criminal or otherwise, has been announced against the employer, Wildcat Dairy.

Second, the Fort Morgan raid carries immense local and state costs to taxpayers with the investigation, prosecution, representation, right to counsel, and detention of the workers. Is it really the best use of limited taxpayer dollars for Morgan County Sheriff James Crone and District Attorney Robert Watson to pursue workers who pose no dangerous threat, contribute to the Colorado economy, and are well integrated into the community?

Most disturbingly, jail bonds have been set for the workers at an absurd $50,000 per person. Even the most dangerous crimes rarely see a bond set this high. The district attorney’s argument of flight risk to justify the high bond simply doesn’t fly when you consider that the workers have families with long-standing roots in the Fort Morgan community.

Let’s be clear. Unauthorized employment and the use of false work documents are serious issues that need to be addressed, but not by criminalizing workers. This is bad policy that wastes taxpayer dollars, separates families and makes everyone less safe by driving a wedge between police and immigrant communities. The vast majority of employers, workers, law enforcement, and the American public agree that the only real solution is comprehensive immigration reform at the federal level.

However, with comprehensive reform unlikely in our deeply divided Congress, the immediate question is whether Homeland Security and local law enforcement will continue to use limited resources to turn dairy workers into felons. If the Obama administration is serious about its own stated priorities, it should immediately halt raids and instead focus on real threats to public safety while working toward comprehensive reform.

On Saturday, at 2 p.m., Congressmen Luis Gutierrez, D-Ill., and Jared Polis, D-Colo., will headline a town hall meeting at Bruce Randolph School in Denver to address this issue. Citizens and residents will share testimonies about the toll ICE raids and deportations are taking on Colorado families.

One speaker will be Jenny, a 7-year- old U.S. citizen whose father was arrested at the Wildcat Dairy. “I know my dad is not a criminal,” Jenny told me. “He just was working hard to provide my family food and shelter. There are lots of other kids like us in my town who are missing their dads, too. This needs to stop.”