ICE faces federal lawsuit over (mis) use of ankle monitors

LatinaLista — Ankle monitors have long been considered the humanitarian alternative to detention for undocumented immigrants who have been flagged for deportation. Yet, because of the actions and statements by Immigration and Customs Enforcement agents in the Dallas field office one lawyer is taking ICE to federal court alleging that ICE is using ankle monitors for “cruel and unusual punishment.” 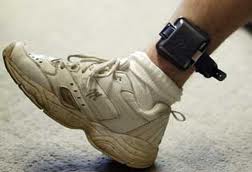 Today, lawyer Arturo Rodriguez filed a federal lawsuit on behalf of Maribel Arellano. Maribel is a 37-year-old mother of seven children, all US citizens. Maribel has been under final order of deportation since 2008. She was released on her own recognizance at that time because she wasn’t considered a flight or security risk and had no criminal record.

Then suddenly, in February 2011, Maribel found herself cuffed at the ankle by a Dallas ICE agent.

She made an agent mad because she had taken her car to get fixed and wasn’t home when an ICE agent stopped by to check on her. It made him mad enough to slap an ankle monitor on her.

If it weren’t for several things, listed in a federal lawsuit filed today by the woman’s lawyer, Arturo Rodriguez, nobody would have ever thought twice about Maribel’s ankle monitor.

However, that’s not the case:

After accepting Maribel’s case, the lawyer asked an ICE agent why the mother had an ankle monitor. She replied it was because Maribel had not submitted a plan of departure for her children, nor got them passports. The agent then told the lawyer that if Maribel did submit those documents there was a possibility that the ankle monitor would be removed.

Hearing that explanation the lawyer felt that the ankle monitor was being used as a form of punishment. It didn’t help that another ICE agent told the lawyer that there was always an empty seat on the bus and that Maribel could be deported at any time when he continued questioning the purpose of the ankle monitor.

When the lawyer inquired about what would happen to the children, the ICE agent said they could move down by the border and walk across to visit their mother in Mexico.

In another conversation, an ICE agent told the lawyer that since her job was to remove undocumented immigrants from the country, the ankle monitor was used as a way to encourage them to leave.

Maribel didn’t like wearing the ankle device. She said she felt like a criminal and the ICE agents certainly treated her that way. One agent made one of her children cry when he screamed at the mother that she had no rights in this country.

To prove she had no rights, ICE agents told her to stay home one day out of the week so that she would be home when they arrived to check on her. The odd thing is they wouldn’t tell her which day to expect them. If she wasn’t at home, they could have used it against her, saying she was non-compliant, to deport her immediately.

On top of that, she had to plug the ankle monitor into a wall outlet for a couple of hours every day to charge the battery — adding to the feeling of being under house arrest, when that was not supposed to be the case.

When Maribel’s lawyer and local Dallas immigrant advocate, Ralph Isenberg, heard how ICE was using the ankle monitor against Maribel, they told ICE officials they would be filing a federal lawsuit.

It wasn’t long before the device was removed.

Rather than being grateful, the lawyer and Isenberg felt this was further proof of how ICE abuses the use of ankle monitors and that Maribel should never have had the device put on her in the first place.

It’s one thing to keep track of criminals but to place it on people who have not shown to be a flight risk, security risk or otherwise have a criminal record is a blatant example of either an agency abusing its power or a select group who think no one will listen to the plight of undocumented immigrants.

How wrong they are.