Latina Lista: News from the Latinx perspective > Palabra Final > Immigration > ICE quietly reveals they’ve deported over 46,000 undocumented parents. But where are the children?

ICE quietly reveals they’ve deported over 46,000 undocumented parents. But where are the children?

LatinaLista — The Immigration and Customs Enforcement (ICE) department of Homeland Security has not had a good last couple of weeks. No matter which way they turned they were getting hammered for not being transparent enough either in their count of undocumented immigrants who escaped capture or their practices treating undocumented immigrants in detention. 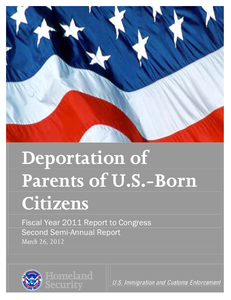 It might be because they realized if they were truly transparent then they could really come under fire, like what happened today — four days after they released the report Deportation of Parents of U.S.-Born Citizens: Fiscal Year 2011 Report to Congress Second Semi-Annual Report.

According to the report, during the reporting period from January 1, 2011 through June 30, 2011, ICE removed 46,486 undocumented parents who claimed to have at least one US citizen child.

This is the separation of families so often cited as a sign of the nation’s broken immigration system.

Critics would argue that it’s a sign that our system is working but when any system lacks a moral component and has no hesitation in separating a parent from their child, a US-born child, then the system is beyond broken.

Today, the Congressional Hispanic Caucus addressed the revelations in this report by issuing a press release:

Washington D.C.: Chairman Charles A. Gonzalez (TX 20), Rep. Luis V. Gutierrez (IL 4), Chair of the CHC Immigration Task Force and Rep. Lucille Roybal-Allard (CA 34) released the following statements in response to an Immigration Customs Enforcement (ICE) Report regarding the annual deportation of parents of U.S. citizens. The Fiscal Year 2011 Second Semi-Annual Deportation of Parents of U.S.-Born Citizens Report reveals that more than 46,000 parents of U.S. children were deported in the 2nd and 3rd quarters of 2011.

“To force hardship on American families is contrary with the ideals and standards of our country. Those who commit violent crimes should be a priority for deportation, but it’s misguided to deport parents who are simply living in the United States as a part of a mixed-status family. Some of those deported were here to raise their American children and to work for American employers, as they comprise a labor pool that is vital to many American businesses,” said CHC Chairman Charles Gonzalez. “I urge ICE to use its policy of prosecutorial discretion to prioritize deportation proceedings and then deport individuals that pose a danger to our communities, which is the wisest use of limited resources and in our economic best interest.”

“Thousands of federal employees go to work each morning with the job of taking parents away from their U.S. citizen children and breaking up peaceful, productive American families. It is a tragedy. The President’s policy of sparing long-time residents from deportation so that we can concentrate our resources on removing serious criminals needs to be fully implemented and followed. We are putting our future at risk every day that we delay serious reform and continue shoveling more good people into deportation and their children into foster care,” said Rep. Gutierrez.

“This report is the latest example of the terrible human toll our broken immigration system is taking on families. Tearing families apart like this is inhumane and completely unacceptable,” said Rep. Roybal-Allard. “We can’t continue to claim to value families while deporting parents in the tens of thousands. This must stop,” Roybal-Allard added.
These deportations have real social and economic costs. According to a 2011 report by the Applied Research Center, more than 5,000 children living in foster care have parents who were detained or deported from the United States.

ICE is in the process of implementing a new prosecutorial discretion policy which takes into account family ties in making deportation decisions.

“I believe it is critical that the new guidelines are interpreted as generously as possible by agency officials to prevent even more families from being torn apart,” said Rep. Roybal-Allard.

Deporting these parents may have followed the “spirit of the law” but it did so in gross contrast to the spirit of what the citizens of this country believe why our forefathers founded this nation.

Forcefully separating a parent from his or her child with a penalty for seeing each other again — either the family giving up life in the US to return to a poorer quality of life in the parent’s native country or forcing the parent to risk their life to return to the US illegally or bar him/her outright for ten years — is not a policy for a democratic nation that prides itself for upholding principles the world over that fly in the face of dictatorships, communism and oppressive regimes.

A policy that separates parent from their children does not provide much separation between the United States and all those countries that we would rather distance ourselves from because of their disregard to human right, democratic principles and the basic tenets of what is right and what is wrong.

featured
Previous Post Non-profit Spotlight: Connecting children and adults to a love of reading
Next PostDeported father had to fight ICE to be allowed to return to US for 10-year-old son's funeral

Non-profit Spotlight: Connecting children and adults to a love of reading
10 Comments
Deported father had to fight ICE to be allowed to return to US for 10-year-old son's funeral