LatinaLista — As the saying goes, “The writing was on the wall.” It was somewhat suspicious when a few weeks back an ICE union boss appeared with GOP politicians to publicly denounce President Obama’s plan for deferring deportation to DREAMer students. 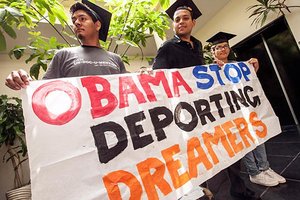 So, when news broke today that some immigration agents were suing the Obama administration for requiring them to implement the Deferred Action for Childhood Arrivals, it was only mildly surprising but very disappointing.

It’s disappointing that these employees would challenge the President on an issue that is widely considered and seen as more of a humanitarian act than anything with real substance since it doesn’t grant automatic citizenship or bestow all the rights of citizenry that someone who has grown up in this country, and knows no other country as home, should have.

The fact that yet another group of supposedly loyal employees of the federal government would feel so empowered as to challenge their boss over an issue that more Americans are in favor than opposed makes their motivations for filing the lawsuit suspect.

Time and time again the nation has witnessed lone individuals or groups challenge the President in ways than no prior President has had to experience. These individuals and groups show a clear disdain for the man who is in the Oval Office to an unprecedented extent that can lead to only one conclusion: racism in its most ugly form not only still exists but feels justified enough nowadays to make its presence publicly known within the ranks of government and the halls of Congress.

The biggest disappointment about this latest challenge to the President will be if the media and the public ignore it and not recognize it for what it is — an attempt to discredit the man who is President.