Immigration reform proposal brings all immigrant laborers into the conversation 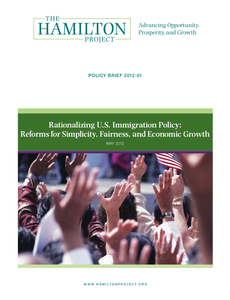 The economic consensus is that, taken as a whole, immigrants raise living standards for American workers by boosting demand and increasing productivity, contributing to innovation, and lowering prices — while also improving their own wellbeing and that of their families.

Any immigration policy has to walk the fine line between protecting the rights of immigrant workers while helping US employers fill demand. What has resulted thus far is the creation of an underground economy, the flagrant abuse of immigrant labor by some employers and a divided perception as to which immigrant labor is of more value to US society.

The report, by Giovanni Peri of the University of California, Davis and published as part of the Brookings Institution’s economic policy initiative The Hamilton Project lays out a series of reforms that would create a market-based immigration system in the United States.

Professor Peri proposes revamping immigration policy to achieve three key components: family unity, humanitarianism and economic opportunity. For starters, Peri would like to the allotment of visas better meet US labor demands. That would include a retooling of the whole immigration process entailing updating visa categories with easier application processes, new rules and revised quotas. Peri contends the current immigration policy is what leads to inordinate wait times, no clear path for citizenship, for those who want to stay at an economic loss to the country.

In addition to addressing legal immigrant workers, Peri also outlines how to handle the sensitive issue of undocumented immigration.

First, a path to earned legal residence could be created for current undocumented workers who have lived and worked for at least three years in the United States. These workers would be required to pay a fee, demonstrate work history in the United States for at least three years, and pay back taxes. Workers successfully able to comply would be given an NC visa and could be subject to lengthened provisional periods before being granted legal residence. All other undocumented workers would face severely restricted opportunities for employment, due to increased enforcement and decreased incentives for companies to hire undocumented workers.

Peri also stresses that the federal government should patrol more vigorously the employment of undocumented workers through use of new technologies such as E-Verify, an Internet-based system that allows an employer to determine the eligibility of their employees to work in the United States. In addition, he advocates that the Department of Homeland Security perform frequent audits and that employers face significant fines and sanctions for noncompliance.

There is no doubt that people from both sides of the aisle on this debate will find fault with Professor Peri’s plan but it’s a beginning. And for any solution to be reached, it must start with a plan and people talking — to one another.