DREAMer activist on path to lead the way in overcoming injustice 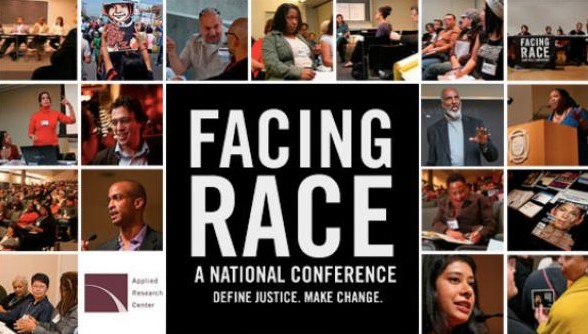 DALLAS — Ramiro Luna was a student at Mountain View Community College when he began organizing protests on behalf of young immigrants who wanted to earn their degrees and work as professionals in the United States.

The 30-year-old activist and his peers came to despise being called illegal immigrants.

“We were able to evolve and take ownership of who we are and finally define ourselves as Dreamers,” Luna explained in the opening session of “Facing Race 2014,” the 10th annual conference of Raceforward.org.

The conference, held at Dallas’ Hilton Anatole Hotel from Nov. 13-15, brought together hundreds of activists, educators, artists, writers and academics from across the country to exchange ideas about how the nation can progress toward racial equality and justice.

Rinku Sen, the president and executive director of Race Forward, said discussion about race is essential, although it may make some people uncomfortable.

“Talking about race openly can be liberating,” she said. “No one ever says that telling the truth about our nation’s greatest shame can actually generate greater understanding and empathy.”

Sen said that there has been some progress in the battle for racial justice.

As examples, she cited a grass-roots effort that stopped the New York City Police from randomly detaining and searching thousands of people; Florida’s cancellation of a contract with a private prison that allegedly abused the teen boys it incarcerated; and a decision by the Associated Press to remove the term “illegal alien” from its stylebook for journalists, replacing it with “undocumented immigrant.”

Sen said the conference attendees came to the event to re-energize themselves and to learn about innovative organizing efforts in other parts of the country.

“We want to leave each other with stronger intellectual and political muscle than when we came here with,” she said.

Luna got resounding applause as he described the activism he has undertaken as a director in recent years in Phoenix Arizona, a place he described as a hotbed in the fight for immigration reform.

“In Arizona, I’ve had some of the most difficult work I’ve ever been involved in,” Luna said. “I’ve been part of many actions from fasts to arrests to acts of civil disobedience. As an activist, it has been overwhelming at times.”

Luna said his work is demanding but has been rewarding too.

In Arizona, the non-profit organization he works for as a field director, Citizens for a Better Arizona, was successful in registering some 4,000 voters for the mid-term elections and electing fresh candidates to replace three elected officials that were viewed as hostile to immigrants.

“I’ve gotten to see people overcome injustice and rise to a level of empowerment that I never would have seen without being fully engaged in this fight,” he said.

Locally, the organization that he helped co-found, The North Texas Dream Team, is still flourishing.

“We’ve successfully helped field more than 2,000 applications for deferred action and we’ve taken five lobby trips to Washington, D.C. with high school and college students who save the little they have to go let their voices be heard. It’s been a beautiful experience to have been part of that.”