Latina Lista: News from the Latinx perspective > Life Issues > Children > Guest Voz: Women’s delegation to get the word out about the harm of Georgia’s immigration laws

Guest Voz: Women’s delegation to get the word out about the harm of Georgia’s immigration laws

LatinaLista — A delegation of women leaders from over two dozen national human rights organizations traveled to Georgia to spend today and tomorrow speaking out against the recent anti-immigrant laws passed in that state. The women, part of the We Belong Together delegation, plan not only on speaking out against the inhumane bill but listening too. 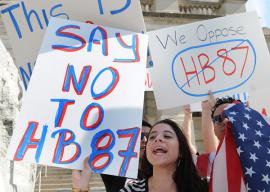 The women will hear, and then share, the stories of women and children directly affected by Georgia’s anti-immigrant bill which, like other similar bills in states like Alabama, Arizona and Oklahoma is making Latino families fearful for their safety, their security and their future.

One of the delegates is Mary Olivella of MomsRising.org. In the following Guest Voz post, Mary shares her motivation for traveling to Georgia and taking part in a demonstration highlighting the harm such laws are doing to our nation.

For more than two hundred years, mothers from every corner of the globe have come here to seek a better life for their families, particularly their children. And all of us, newcomers as well as those with families who have been here for generations, want our children to live a safe and healthy life, one with the opportunity to fulfill their hopes and dreams.

Over the course of our nation’s history, there have been cycles of anti-immigrant fervor including a painfully virulent one right now. The most recent manifestation is Georgia’s passage of a harsh Arizona style anti-immigrant law. This law threatens the human rights, safety and dignity of many Georgia families.

Like Arizona’s SB1070, Georgia’s new HB 87 law will have devastating effects on women and children, including racial profiling, parent-child separation, home and workplace raids and grievous injury due to domestic violence as many women will be afraid to report domestic violence in fear of police retaliation.

But unlike Arizona’s anti-immigrant legislative passage last year, there is only sparse media coverage about the harm being done in Georgia in the name of immigration law enforcement.

The word needs to get out.

To help in this effort, I will be representing MomsRising, a million-member organization working to build a family-friendly nation, on the We Belong Together delegation of dozens of women’s organizations traveling to Atlanta on September 28 and 29th.

The purpose of the delegation is to listen directly to Georgia residents about the effects of the new law, and then share their stories with our respective organizations and the media.

We aim to help raise the national visibility of the harmful impact of Georgia’s law and also to promote a gender lens in the overall national debate on immigration.

It’s no secret that human rights abuses in the name of immigration law enforcement have been inflicted upon families in our country for a very long time. However, it is still far too prevalent, and the world is watching.

A United Nations report in March of 2008 states that: “Xenophobia and racism towards migrants in the United States has worsened since 9/11.

The current xenophobic climate adversely affects many sections of the migrant population, and has a particularly discriminatory and devastating impact on many of the most vulnerable groups in the migrant population, including children… [T]he United States lacks a clear, consistent, long-term strategy to improve respect for the human rights of migrants.”

There are times when a video can bring to life what is really going on for immigrant families in our country.

The (linked) video of what happened to two young children in Arizona in January of 2009 starts with the two small children crying and looking terrified, alone in a car, reaching out for their mother who had been taken away by sheriff deputies wearing ski masks after being stopped for a minor traffic violation.

Law enforcement officials in ski masks separating mothers from crying children is a nightmare that should never happen in America. Yet incidents similar to this where children and mothers are being treated inhumanely are occurring on a regular basis.

Any law that sanctions civil and human rights violations is not compatible with our nation’s principles. Children, especially, suffer when we treat each other inhumanely.

In Atlanta I hope to help raise the voices of countless women who have been marginalized and silenced in the name of immigration law enforcement. I also hope to learn how we can do more to bring about positive changes that will help our country as a whole.

Throughout our country there are many divergent opinions on how our immigration policies should be revised. But surely most of us can agree to uphold a vision that all children and their mothers — in fact everyone standing within our nation’s borders — should not be abused nor suffer from human rights violations.

This, our common humanity, needs to be our guiding vision. However difficult, we must work to advance cool-headed, fair-minded approaches to our immigration issues.

Making mothers and children suffer cannot be part of the answer.

Mary Olivella is the Vice President and Public Health Specialist for MomsRising.org