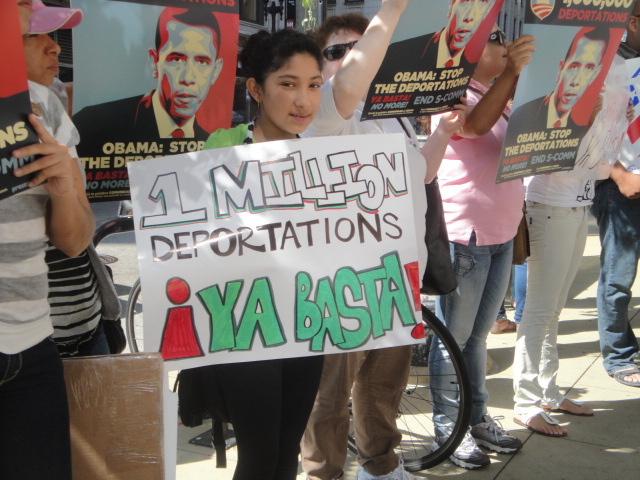 LatinaLista — A tweet making its way through the Twittersphere over the last few days is one with a simple message: “Don’t be a DIC.” The double-meaning is supposed to startle the reader into finding out more — something that the issue the tweet is about has failed to do among a majority of Americans.

The “DIC” stands for “Deporter-in-Chief” and has been but one sign of the growing dissatisfaction immigrant advocacy groups and a large number of Latinos have with President Obama and his administration for their handling of deportations and the immigration reform issue. Today, there launched another sign that the honeymoon between Latinos and President Obama is beyond the breaking point.

Called the Obama Legacy Project, the national campaign was created to hold Obama accountable for his record-high deportations and the multiple abuses committed against undocumented immigrants during his time in office.

“Latinos are at a tipping point with President Obama on immigration,” said Arturo Carmona, executive director of Presente.org. “It’s time for the President to use his executive authority to take action on immigration– ending deportations now. If he does not, his record high deportation levels, high imprisonment rates, and militarized border tactics will brand him as the worst President in history on immigration.”

During Obama’s time in office, there have been 2 million deportations, more than under any other President in history — the vast majority of which are Latinos who committed no crimes other than not having the legal paperwork. Also, 28 people have been killed by the Border Patrol since 2010, again, the vast majority Latino.

Finally, immigration offenses are now “federal crimes” — criminalizing tens of thousands of people who find themselves in federal prisons for minor violations and on an automatic path to deportations and a 10-year ban from re-entering the United States.

From San Diego to Boston, 6 cities in total across the country, the Obama Legacy Project kicked off today with specific events to highlight the deportation record of the current administration. In addition, the new group is also demanding that President Obama:

Also, a national petition has been launched by Presente.org demanding an end to the deportations, until immigration reform is finally addressed by Congress.