Latina Lista: News from the Latinx perspective > Palabra Final > Immigration > Immigration: Deported and exiled, U.S. citizen finally recognized by government as one of our own

Immigration: Deported and exiled, U.S. citizen finally recognized by government as one of our own 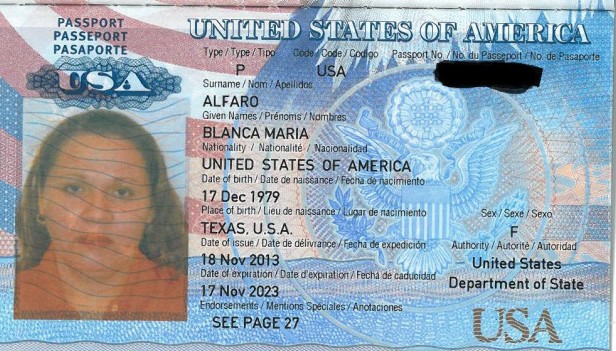 Blanca Maria Alfaro has always been a U.S. citizen. She was born in Houston, Texas on December 17, 1979.

In 1995, Blanca applied for and received a U.S. passport based on her Texas Birth Certificate. In 1998, Blanca traveled from El Salvador to JFK International Airport in New York. She presented her U.S. passport for admission. The nightmare that ensued has finally ended today when she received her third U.S. passport after having been illegally deported, exiled, and detained over the course of the last 15 years.

The INS officials at the time did not believe Blanca was a U.S. citizen. She did not speak English because she grew up from the age of 5 in El Salvador. She was 18 and this was her first time coming back to her native land of the United States. In 1998 at JFK, INS officials unlawfully detained Blanca, interrogating her for hours and threatening her with serious bodily harm unless she admitted that she was not the person listed on her passport.

After hours of this relentless torture, Blanca supposedly made a false confession. She signed a “sworn statement”, written in English, that she was someone else and that she was born in El Salvador. This was a clear false confession, as can be seen from the evidence on record.

After being illegally deported to El Salvador, Blanca immediately went to the U.S. Embassy in El Salvador to apply for a new U.S. passport. After a 9 month investigation, State Department officials issued Blanca her second U.S. passport.

Blanca was again subjected to a marathon interrogation when she attempted to enter the U.S. in 1999 with her second U.S. passport. If it were not for the intervention of a friendly INS official, she may have been deported again. She was released into the U.S. as a U.S. citizen in 1999 after a family member convinced INS officials that she was in fact a U.S. citizen.

For the second time, Blanca was stripped of her right to U.S. citizenship without any due process of law. Instead of giving Blanca a chance to confront evidence against her, the U.S. embassy officials in El Salvador told Blanca that the case was in Washington and nothing could be done.

As it turned out, State Department officials in Washington D.C. did nothing with Blanca’s case until her second U.S. passport was “revoked” in 2012 by a State Department attorney, who admitted to not having nearly enough evidence to make a meaningful decision. In other words, the State Department broke the law several times: First when it confiscated her passport in 2005 and second when it inexplicably delayed the revocation decision for about 7 years.

Blanca realized that the U.S. government would never allow her to return to her native country of the United States. In March of 2013, she applied for admission to the U.S. at a border crossing in Texas, showing her Texas birth certificate, Social Security Card, and New York Photo identification as proof of U.S. citizenship.

Again, immigration officials did not believe Blanca. She was detained for 17 days until attorneys at ICE’s Office of Chief Counsel in Oakdale, Louisiana released her from detention because they believed she was a U.S. citizen.

She was not out of the woods yet.

ICE’s decision only meant that they would not affirmatively push for her deportation from the United States. Released into the U.S., she was stateless.

We became the attorneys for Blanca in April of this year. We always believed that she was a U.S. citizen, even when journalists and a Congressman abandoned Blanca because apparently the U.S. government can do no wrong unless the narrative is crystal clear black and white.

Our perseverance paid off.

The U.S. State Department issued her a U.S. passport.

University of Houston research finds potential key to learning a new language
1 Comment
Video: Climate action superhero returns to teach children how to save the planet