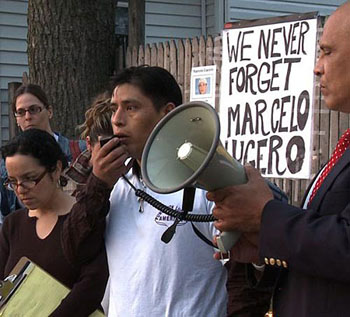 As any wise parent, teacher or leader knows — there are always two sides to every story. I was reminded of that basic fact when I heard President Trump declare during his hour-long speech to Congress that he was going to create a new office to especially address Victims of Immigration Crime Engagement, otherwise known by its catchy acronym VOICE.

My immediate thought listening to President Trump was: What about the immigrant victims of crimes committed by citizens?

No one in the White House seems to be thinking about that side of the story and there’s a reason. Several times during his prime-time speech, Trump implied that he still sees Latino immigrants as “bad hombres” and murderers. He highlighted the sad scenarios of four different families, who were his gallery guests, and who each had lost a loved one at the hands of undocumented immigrants.

These grieving family members were a poignant symbol to viewers of just what kinds of bad things are done by undocumented Latino immigrants. Yet, again, no one cared to present the other side of the same sad story.

It doesn’t matter to Trump, or his supporters ignorant of crime statistics, that in reality murders comprise a small percentage of crimes committed by noncitizens, regardless of their legal status, and that’s according to data from the U.S. Sentencing Commission.

Combine that truth with the Congressional Research Service findings that the vast majority of undocumented immigrants don’t even fit in the category of aggravated felons, whose crimes are typically murder, drug trafficking or illegal trafficking of firearms, and one begins to see a story where selective truth takes precedence over basic facts.

It doesn’t help either that Trump can boast that, as a result of his Immigration Executive Order, Homeland Security has been finding those “bad” guys and deporting them. The part he’s not telling is that some of those immigrants picked up have been DREAMers, young people brought to the U.S. by their parents when they were children. In some cases, the only charge against them has been that they overstayed their visas — something, that as children, they had no control over.

Murder is a heinous act — no matter the victim. Yet, to plant the suggestion that it’s only citizens being victimized does a gross injustice to the truth and the other side of this story.

Take for example, the murder of Luis Ramírez in Shenandoah, PA. The 25-year-old father of two was beaten to death by a several teen football players who were heard shouting “Go back to Mexico.”

Or the case of Mardoquo Sincal Jochola, from Guatemala, who lived in Philadelphia and was “sucker-punched” to death.

Or the senseless stabbing of Marcelo Lucero, an Ecuadorian immigrant who was murdered by a group of Long Island teens who were enjoying a game of  “beaner hopping.”

Or the near-fatal beating of Guatemalan immigrant Damian Merida, who was beaten by six Massachusetts boys and left with a traumatic brain injury — as good as dead.

Or the sad murder of Onesimo Marcelino Lopez-Ramos, an 18-year-old whose head was bashed in with a rock by a trio of Florida teens who were playing a game, called “Guat hunting,” targeting Latino immigrants to rob.

In each of these cases, and more that exist, innocent Latino immigrants were targeted and victimized by their assailants. They left behind an unfillable hole in the hearts of their parents, children, siblings and friends, just like any other victims of senseless murders.

And yet, their families and friends, don’t characterize or demonize all Americans as being murderers.

It’s a side of the story that more Americans need to know — and learn.

(Featured Photo: Joselo Lucero had followed his older brother, Marcelo, from their hometown in Ecuador to the Village of Patchogue. Shocked by his brother’s murder, Joselo soon called out for justice for his brother and brought attention to the problem of anti-immigrant violence in the area. Thrust into the public eye after his brother’s death, Joselo urges the town to come together so that Marcelo’s death will not have been in vain. Source: usdoj.gov)