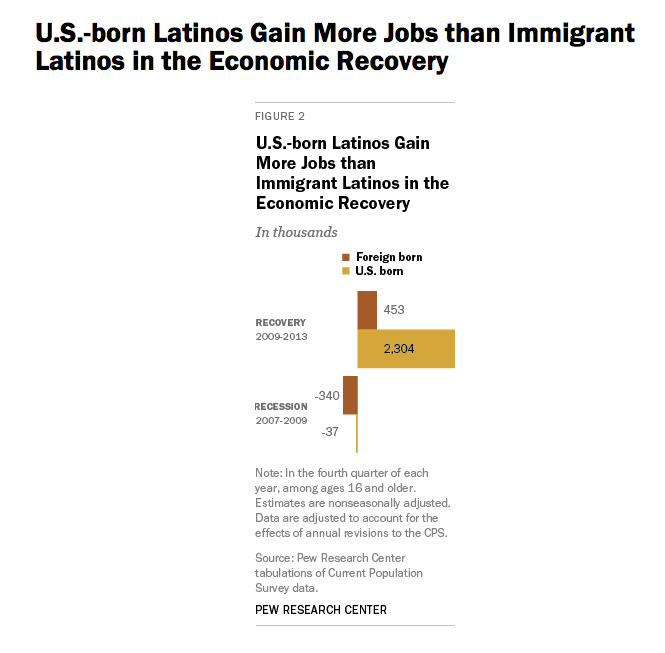 LatinaLista — A popular line of defense when justifying the presence of Latino migrants in the country was “they do the jobs Americans don’t want.” Well, the next generation of Latinos is putting a spin on those words according to a new study released by the Pew Research Center’s Hispanic Trends.

For the first time in 20 years, Latinos born in the United States outnumber Hispanic immigrants in the U.S. workforce. Researchers accounted for this reversal with the fact that a slower economy, stricter immigration and border enforcement and the bust in the construction industry made it more difficult for migrants to either enter the country or get jobs once they were here.

The growth of U.S.-born Latinos in the workforce isn’t a random fluke. Projections have long been made that Latinos (US-born) would be the majority in the United States before long. Several states and/or cities already have majority Latino populations.

Yet even with this demographic growth, it doesn’t always translate into a better economic picture for Latino workers.

Half of Latino workers are concentrated “in just four industries — construction; eating, drinking and lodging services; wholesale and retail trade.” Rounding out these sectors are professional and other business services.

So why did wages for Hispanics overall increase from 2007 to 2013 if neither U.S.-born nor foreign-born Hispanics experienced an increase? The answer lies in the changing composition of the Latino workforce. Because Hispanic immigrants earn less than U.S.-born Hispanics, their retreat from the U.S. workforce raises the estimated earnings of Latinos overall.

This shift from a dominant immigrant workforce to native-born among Latinos will certainly impact the economy in ways that a society accustomed to a shadow economy and low prices in services will soon feel and may regret.

Brazilian tattooists on the front lines of helping detect skin cancer
Comment
TX US Rep Cuellar: "Mexican leaders cannot believe the United States has not responded to its offer to help secure the southwest border"