LatinaLista — How long does a person have to live in a foreign country before he/she calls it home? 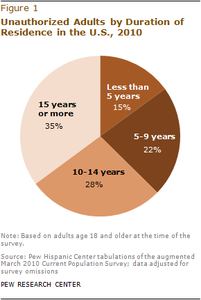 The answer, of course, is however long it takes for that person to feel comfortable in their surroundings. While some people quickly adapt and make themselves at home, for others it may take a few years. But it’s a safe bet to assume that if a person has been living in a foreign country for 15 years or more, then they’re feeling right at home.

The analysis also found that almost half (46 percent) of the undocumented adults are parents of minor children.

Unlike what the majority of the GOP presidential candidates want the American public to believe, this is not a new or ongoing phenomena. Pew researchers discovered that current illegal migration is down to practically nothing and some of the people whom are being targeted for deportation today are those who have lived over a decade in this country.

Making matters worse is that this is not an issue where deportation can rest solely on a person’s citizenship status.

Because of those findings, deportation literally is tearing up family units and, in the process, endangering the emotional and physical well-being of 16.6 million people, among them children who will grow up to either be contributing members of society or angry, dysfunctional adults who will see little purpose in giving to a country that took away so much from them — it’s the nation’s choice.