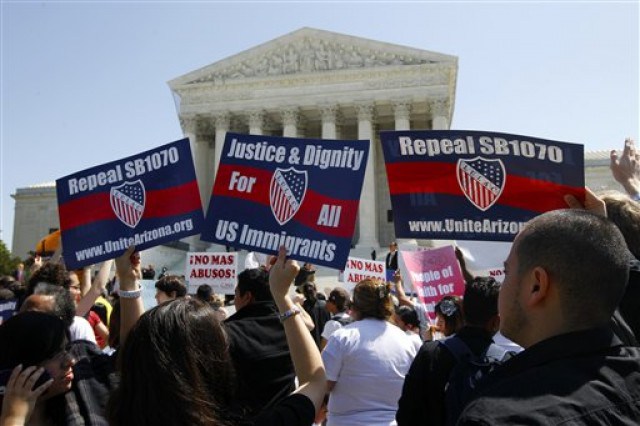 In a matter of weeks or even days, we anticipate that President Obama will articulate some changes to immigration administration and enforcement that will provide some security to undocumented persons living and working in the United States. This action will represent the full and final defeat of the legislative effort at the hands of House Republicans. Despite some fantastical claims to the contrary, the political effects of this turn of events will likely be profound and long-lasting in a manner that favors Democrats at all levels of government.

Since Latino Decisions has been polling on this almost constantly since before the 2012 election, we thought it would be worth reminding you exactly what’s what with respect to the electorate and immigration reform.

To that end, we are running this two-part series highlighting the overwhelming evidence that will shape the politics of the President’s actions and the Republicans’ inaction. Today we focus on public support for immigration reform policies. Tomorrow we will take a look at the political fallout Republicans face as a consequence of their positioning on this issue.

2. Latinos overwhelmingly identify immigration as a, if not the, most important issue. This too has been the subject of some dissembling. Other issues DO matter to Latinos, most specifically the economy in recent years. Those anxious to dismiss the importance of immigration, we believe, are engaged in an exercise in self-deception. Reliance on Pew findings, which are based on a quirky design and question wording, do not change the political reality that has been as plain as day since 1994 and Proposition 187. Anti-immigrant stances mobilize Latinos like no other issue.

3. Latino citizen registered voters are intimately connected to the issue. Our polling has consistently revealed that supermajorities of Latino voters, 62% in our last poll, know someone who is undocumented, usually a friend or family member. Moreover, nearly one in three knows someone already subject to some deportation or detention action.

4. If the President goes big, there are rewards for him and fellow Democrats. A retrospective evaluation of DACA in our last poll found a tremendous increase in Democratic enthusiasm as a consequence of the action.

5. Latino support for protecting parents and spouses of Americans from deportation is strong, and even stronger if that protection is accompanied by work permits. These are two potential actions that are likely to be part of the President’s actions. Overall, full-fledged protection is preferred to a less formalized discretion, and in all instances, community support among Latino registered voters is higher when the protection includes the opportunity to work.

Gary Segura is co-founder and principal of Latino Decisions. He is a Professor of American Politics at Stanford University, where he is also Chair of Chicana/o Studies. His latest book, Latino America: How America’s Most Dynamic Population is Poised to Transform the Politics of the Nation, draws from years of Latino Decisions research and is set for publication next month.

Democrats, GOP, immigration reform, politics, voters
Previous Post Guest Voz: Beauty is living off the grid along the Mexican Pacific
Next PostSome Arizona schools take a pass on program to give free meals to students

Guest Voz: Beauty is living off the grid along the Mexican Pacific
Comment
Some Arizona schools take a pass on program to give free meals to students