The human cost of anti-immigrant policies: The starving of Latino immigrant children 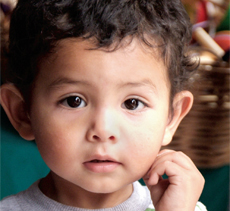 Bread for the World Institute releases today a disturbing report. According to the findings, Latino immigrant children are the most likely to be malnourished and suffering from hunger.

In families where one or both parents are prevented from finding work due to legislation that penalizes employers, the fate of the children in these families is at severe risk.

Even though citizenship status isn’t taken into account when a person applies for nutritional programs, like the Supplemental Nutrition Assistance Program known as SNAP, the undocumented are too afraid to ask for help out of fear the government will deport them.

The belief that participating in SNAP could affect their immigration status. In fact, non-citizens cannot be deported, denied entry to the country, or denied permanent status because they apply for or receive SNAP benefits.

It is a sad irony that the malnourished faces of Somalian children should evoke such sympathy from our country at a time our own state governments’ actions are creating a similar event in our own neighborhoods.

What is even sadder is that the people who have the ability to make it easier for Latino immigrant children to stop going to bed hungry would rather donate money to children who live a continent away and ignore the ones who are literally on their doorsteps.