Latina Lista: News from the Latinx perspective > Palabra Final > Politics > In his ongoing bid to be a Tea Party favorite, TX Gov. Perry crosses the line with uninsured Texas Latinos

In his ongoing bid to be a Tea Party favorite, TX Gov. Perry crosses the line with uninsured Texas Latinos

LatinaLista — Today’s unsurprising announcement from Texas Gov. Rick Perry that he “has no intention” to expand Medicaid under the Patient Protection and Affordable Care Act. because, according to a press release issued by his office: 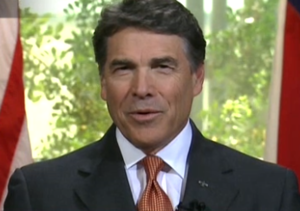 Expanding Medicaid would mandate the admission of millions of additional Texans into the already unsustainable Medicaid program, at a potential cost of billions to Texas taxpayers.

In other words, Gov. Perry has just officially declared healthcare the next class warfare — again, it’s not surprising. This is a governor who has not only lost his footing in national politics but he has lost touch with reality as it exists today in the Lone Star State.

According to the Texas Medical Association, Texas is the uninsured capital of the country.

More than 6.3 million Texans – including 1.2 million children – lack health insurance. Texas’ uninsurance rates, 1.5 to 2 times the national average, create significant problems in the financing and delivery of health care to all Texans. Those who lack insurance coverage typically enjoy far-worse health status than their insured counterparts.

Yet, this Governor has the audacity to refuse tens of billions of additional dollars for Medicaid because, as he stated in a letter to Health and Human Services Secretary Kathleen Sebelius: “I oppose both the expansion of Medicaid as provided in the Patient Protection and Affordable Care Act and the creation of a so-called “state” insurance exchange, because both represent brazen intrusions into the sovereignty of our state.”

Strange how when it comes to the impoverished in the state that Perry would be so quick to refuse funds but when it came to demanding money from the federal government to address the wildfires that plagued the state in 2011, he wasn’t shy about asking or receiving it.

Needless to say, Perry’s stand has evoked strong criticism from Latino politicians throughout the state:

Border state Sens. Rodriguez, Uresti, Zaffirini, Lucio, and Hinojosa criticized Perry via a joint statement from the Texas Senate Democratic Caucus. The Caucus is chaired by state Sen. Kirk Watson, D-Austin.
“Today’s announcement was utterly lacking in transparency, debate or discussion. This is a decision for the people of Texas and their representatives, not a dictate to be handed down from on high in Austin. And the Texas Constitution ensures that this will not be the last word on the matter,” the statement from the Democratic senators read.

It is clear that Perry put politics above the welfare of the vast majority of Texans and that is a sad commentary on Texas and Texans — and should be the impetus to get the disenfranchised voters of Texas mad enough to finally make their voices heard and votes counted.